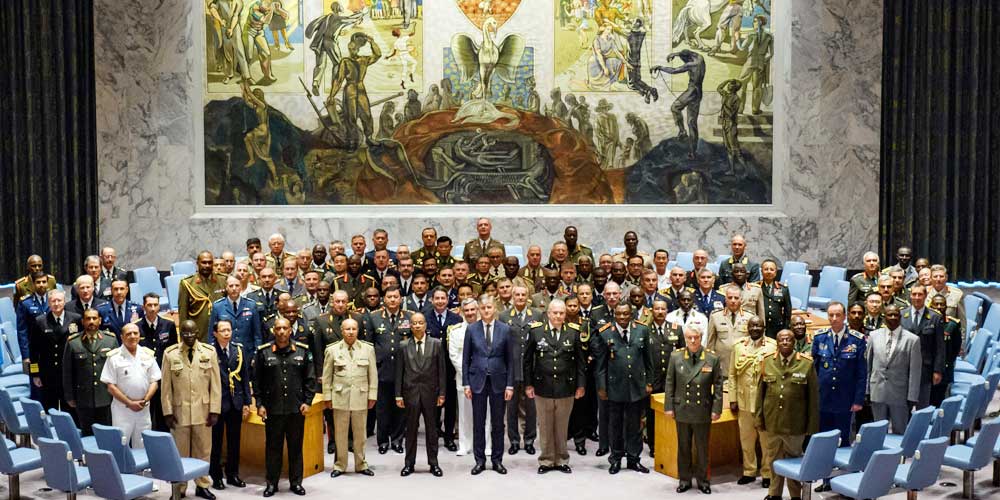 (New York, July 11, 2017)  The Deputy Chief of Staff of the Armed Forces of Liberia, Brigadier General Prince Johnson III, has described the just ended Chief of Defense Staff meeting held at the UN Headquarters in New York as a great learning experience for Liberia.

Brigadier General Johnson and AFL Chief of Operations HQ Col. Daniel Holman, represented Liberia at the meeting that brought together  heads of the Armed Forces of about 100 countries   that contribute peacekeepers to UN Peacekeeping Missions around the world.

According to a dispatch from Liberia's Permanent Mission to the United Nations, the meeting among other things discussed issues surrounding rapid deployment of troops, training , soldiers' conduct and discipline and the need to increase the number of female peacekeepers which is currently around 6 percent.

Deputy Chief of Staff Johnson said the experiences shared by other contributors especially Uganda who has an all female platoon in the Congo, will help Liberia who has rejoined the peacekeeping efforts after nearly 60 years to strengthen its peacekeeping capacity.

Liberia is currently contributing a company strength of  75 peacekeepers including 8 females to the United Nations Multidimensional Integrated Stabilization Mission in Mali (MINUSMA) following its service as a platoon under the African-led International Support Mission to Mali (AFISMA). " We went under AFISMA serving as a platoon with Nigeria and Togo in June of 2013. AFISMA was transformed to MINUSMA and as of February 2017, we have a company strength of 75 operating independently" the Defense official explained.

The Deputy Chief of Staff also used his visit to New York to negotiate on behalf of Liberia, a Memorandum of Understanding  that details the number and type of personnel as well as equipment and services being provided by contributing member states and the UN support.

Brigadier General Johnson asserted that it is a standard procedure that every contributing country including Liberia funds the deployment and upkeep of its soldiers including provision of major equipment and services and get reimbursed. "We are not alone, based on the new regulations of the UN some changes have been done. Other countries are also negotiating their MOU. The UN has two terms: the dry lease and wet lease. Liberia is going under the wet lease where we go independent and take care of our troops and then the UN reimburses us" He explained.

When completed the MOU will state how much and how Liberia will be reimbursed for major equipment, maintenance, troop deployment and welfare among others.

At the same time, Brigadier General Johnson disclosed that more soldiers of the AFL are eager to serve on peacekeeping missions in accordance with the quest of the  President and Commander in Chief of the AFL to give back but could not now due to the terms of the negotiated MOU . " The motivation is high; the soldiers are eager;  we are hopeful, after the signing of the MOU , we are requesting increment to a full company size of  150 peacekeepers. The military is about service and the soldiers are ready to serve;  it's just that our MOU gave us a set number".

The AFL Deputy Chief of Staff concluded by thanking Liberia's Permanent Representative to the United Nations Ambassador Lewis Garseedah Brown II and his staff for all the support during the MOU negotiation process.