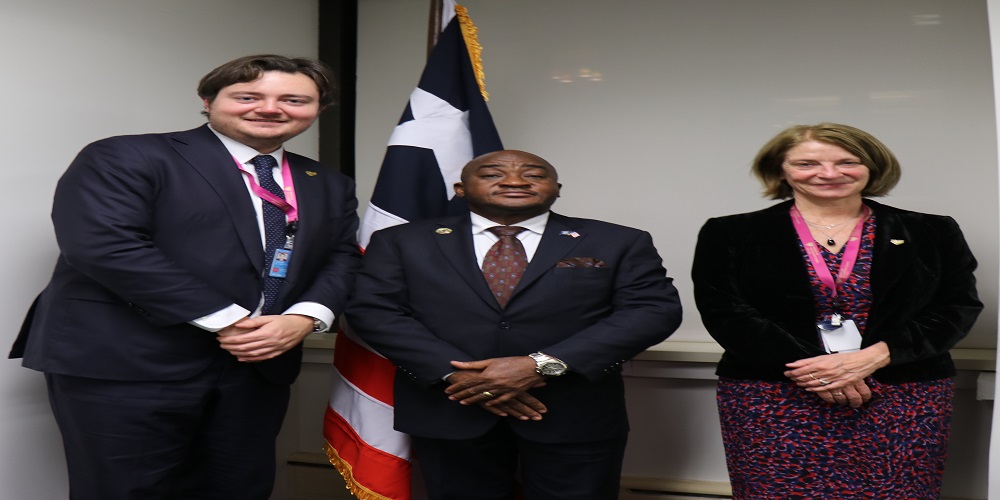 Liberia's Ambassador Extraordinary and Plenipotentiary and Permanent Representative to the United Nations, His Excellency Dee-Maxwell Saah Kemayah, Sr. says the Government of Liberia is ready for business, and actively seeking partnerships and investments in the agriculture and fishery sectors.

According to Ambassador Kemayah, the sectors provide immense potential to transform the lives of ordinary Liberians through the creation of jobs, especially for the youths, who make up more than sixty-three percent (63%) of Liberia's population.

Ambassador Kemayah stressed that His Excellency Dr. George Manneh Weah, President of the Republic of Liberia attaches importance to moving the agriculture sector forward as captured in the Government's national development framework, the Pro-poor Agenda for Prosperity and Development (PAPD); and sees it as a surest way towards addressing the economic difficulties that Liberia is experiencing and job creation for the people who are at the center of the Pro-Poor agenda.

During a recent meeting with Mr. Jens Frolich, State Secretary and Deputy Minister of Foreign Affairs of Norway at the office of Ambassador Kemayah at Liberia's Permanent Mission in New York, Ambassador Kemayah disclosed that the entire agriculture sector presents a window of opportunity and stressed that the Government seeks investments that will move away from subsistence to mechanized and commercial farming, with a focus on value-chain production, which ensures that every actor in the chain is relevant.

Said Ambassador Kemayah: "We do not seek handouts in this area. We seek investments. That's why His Excellency President Weah continues to tell the world that Liberia is ready for business. For instance, if an investor is interested in rice production on a commercial skill, arable land is available--even lowland, labor is reasonable, and there is the assurance that the Government under the leadership of His Excellency President Weah will work with you. It's a window of opportunity! "

Ambassador Kemayah further stressed that investment in agriculture in Liberia, whether crops or livestock, will also provide investors the opportunity to export to the region, as Liberia is ideally located and can easily become a trading hub for neighboring countries. "Several products--tomatoes, onions, poultry are imported; an investment on a commercial scale will curtail that. Liberia stands in a position that you--any investor can make it a hub in terms of marketing. You are producing in Liberia, but you can supply Sierra Leone, Ivory Coast, and other countries. The necessary conditions for production are there; that's why we seek investments." Ambassador Kemayah emphasized.

For the fishery sector, Ambassador Kemayah informed Mr. Frolich that officials of Liberia's National Fisheries and Aquaculture Authority continue to actively engage and seek partnership at different levels for the expansion of the sector; in a bid to transform the lives of Liberians and contribute to the economy.

The Liberian Envoy then informed Mr. Frolich that the Liberian economy is under immense stress, fueled by the fall in prices of major export commodities and departure of the United Nations Mission in Liberia (UNMIL) amongst other factors.

Hailing Norway's partnership in the forest and energy sectors over the years, Ambassador Kemayah stressed that Liberia now needs all hands on deck to help it go through this difficult phase of economic challenges which he-Ambassador Kemayah believes would be brief; especially with finding a balance between environmental protection and reaping the economic benefits of the natural resources that Liberia is endowed with. "Sometimes it is a tough situation. As a country, you are faced with challenges. You see other countries tapping into their forests and other resources to cater to their citizens and you have similar resources but you have to preserve it for the benefit of not just your country but the world. At the same time, you are preserving the forests and other resources and your people are dying. It's time for all hands to come on deck-- our partners and friends; including Norway, to help contribute to improving livelihood in Liberia as we help to preserve the forests and other natural resources. There is a need to take a deeper look into the situation." Ambassador Kemayah emphasized.

In response, Mr. Jens Frolich, State Secretary and Deputy Minister of Foreign Affairs of Norway acknowledged that finding a balance between environmental protection and reaping the economic benefits of natural resources is a classical problem that Norway is trying to find a regional approach to address.

Mr. Frolich said Norway's 'forest preservation and agriculture program' was a big international effort of his Government and assured that its model of impact is being looked at, especially for countries like Liberia that need development and income for its people.

Earlier, Mr. Frolich informed Ambassador Kemayah that Norway has a lot of interest in continuing its work with Liberia in the forest and energy sectors and looks to further collaborate in Norway's quest to put sustainable ocean management--The Blue Economy on the international agenda.

The Norwegian Minister disclosed that the High-Level Panel for a Sustainable Ocean Economy, under the leadership of the Prime Minister of Norway, Erna Solberg, will present its report at the United Nations Oceans Conference in Lisbon, Portugal, in June 2020.

In response, Ambassador Kemayah commended Norway's leadership on the High-Level Panel for a sustainable ocean economy--The Blue Economy; and assured that Liberia looks forward to its participation in the conference. Ambassador Kemayah asserted that Liberia's National Fisheries and Aquaculture Authority and Environmental Protection Agency would particularly be interested in attending the United Nations Oceans Conference given that both entities have mandates in the area of ocean management.