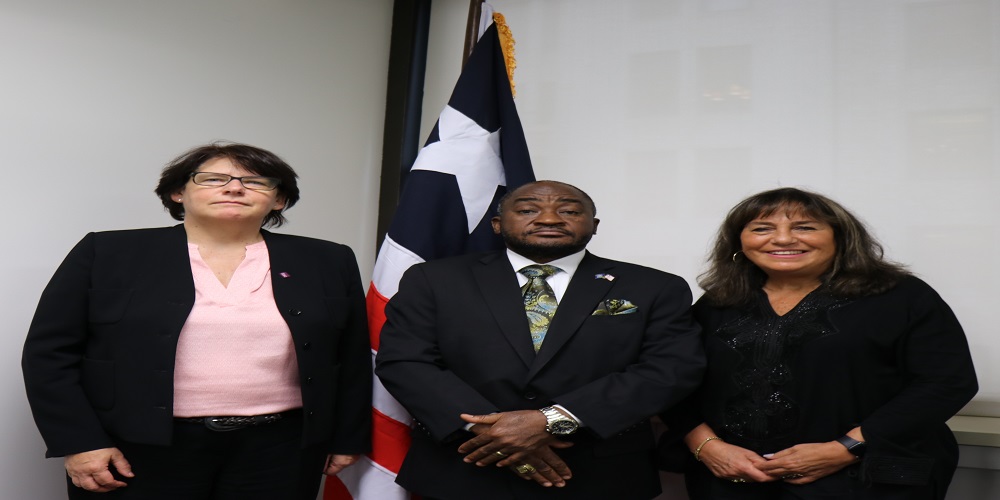 Liberia's Ambassador Extraordinary and Plenipotentiary and Permanent Representative to the United Nations, His Excellency Dee-Maxwell Saah Kemayah, Sr. says the Government of Liberia remains fully committed to and working assiduously to ensure continuous equal access to justice for all Liberians and inhabitants of Liberia.

Ambassador Kemayah said the Government through its National Development Plan--the Pro-Poor Agenda for Prosperity and Development (PAPD), envisioned and launched by His Excellency Dr. George Manneh Weah, President of the Republic of Liberia,  has shown deep interest and resolve towards ensuring a country where equal access to justice, the rule of law and human rights will continue to prevail as captured under Pillar Three (3) of  the Pro-Poor Agenda.

Said Ambassador Kemayah: " We are fortunate as a Country at this point in time that we have a President, His Excellency President Weah, who has deep interest in the rule of law. Our President is working assiduously along with the team of officials in his Government to ensure not just continuous access to justice for all, but continuous equal access to justice for all. He has not held back in terms of his pronouncements and actions, highlighting that there is equal opportunity for all Liberians; not just Liberians, but all who are residents and inhabitants of Liberia."

A dispatch from the Permanent Mission of Liberia to the United Nations quotes Ambassador Kemayah as stressing that equal access to justice for all further enhances the protection of Human Rights, a tenant that His Excellency President Weah strongly believes in and promotes.

The Liberian diplomat to the United Nations also highlighted that Liberia's Justice Minister Cllr. Musa Dean, the Chief Justice of the Supreme Court of Liberia, His Honor Chief Justice Francis Korkpor, and Associate Justices of the Supreme Court share an unwavering commitment to upholding the rule of law and the independence of the Judiciary and continue to do a lot to further strengthen the justice sector.

However, Ambassador Kemayah was quick to point out that despite the strongest political will being exhibited by His Excellency  President Weah and his Government, there is still a need for additional support to further strengthen the independent Judiciary and justice system. "With all the political will and unflinching commitment on the part of His Excellency President Weah and his Government, we must also be real that owing to the scarcity of resources and competing priorities in Liberia, there will always be the need for additional support-- whether through your organization or through donors for the Judiciary and Justice System in Liberia." Ambassador Kemayah stressed.

Ambassador Kemayah was speaking on Tuesday, October 22, 2019, when the Executive Director of the International Legal Assistance Consortium (ILAC)-- a consortium of lawyers, judges and prosecutors from Countries across the world-- presented to him a copy of its newly released report titled: "Still Looking for Justice--Customary Law, the Courts and Access to Justice in Liberia" at the offices of the Permanent Mission of the Republic of Liberia to the United Nations in New York.

Ambassador Kemayah assured that His Excellency President Weah will leave no stone unturned in ensuring that there is equal access to justice for all in Liberia irrespective of ethnic, social, political, economic or geographic status. "We shall continue to protect and uphold the rule of law because to do that will ensure a wholesome society." He stressed.

According to Ms. Johansson, the report found that both customary and the formal judiciary collectively play a key role in the prevention and resolution of local conflicts that could trigger broader unrest, and need to be strengthened to enhance productivity.

As part of its recommendations, the report of the International Legal Assistance Consortium (ILAC) calls for the strengthening of the Legal Aid  and Public Defenders Programs in Liberia; as well as the development of a modality for documenting customary practice; especially customary proceedings and procedural rules by the Ministries of Justice and Internal Affairs, the Supreme Court of Liberia, the National Council of Chiefs and Elders in collaboration with the Louis Arthur Grimes School of Law and the James A.A. Pierre Judicial Institute.

Ms. Johansson informed Ambassador Kemayah that the report, funded by the Swedish International Cooperation Agency (Sida), builds on earlier work done by ILAC in Liberia in 2003--justice system assessment, and the recent interest by the G7 Plus (G7+) Countries highlighting the importance of traditional justice and how it can be supported.

Established in 2010, the G7+ is an intergovernmental voluntary organization bringing together countries that are either facing active conflict or have recent experience of conflict and fragility.

Ms. Johansson thanked the Liberian diplomat, stressing that it was great to hear him talk about his country, acknowledging Ambassador Kemayah's passionate call for additional support to the Judiciary and justice system, and assured that her Organization--the International Legal Assistance Consortium will consider ways it could further provide support for Liberia's and Judiciary and Justice system.