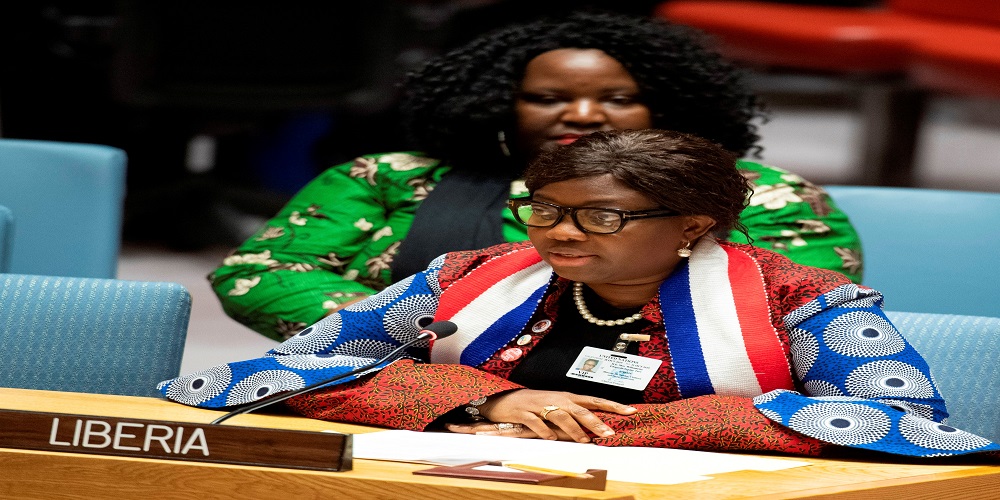 Liberia's Minister of Gender, Children and Social Protection, Hon. Williametta Saydee-Tarr says the Republic of Liberia, as a United Nations Troop Contributing Country, has made immense progress in achieving the gender parity requirement of the United Nations Peacekeeping Operations.

Minister Tarr informed the United Nations that the Republic of Liberia has achieved eight percent (8%) of the gender parity requirement within peacekeeping missions by the Armed Forces of Liberia, and is exerting all efforts to reach the required fifteen percent (15%)  by the year 2022.

Minister Tarr asserted that the Government of Liberia is also working to expand the presence of female officers across the Liberian security sector. "Currently, the security apparatus in Liberia, including the Armed Forces of Liberia, the Liberia National Police and the Liberia Immigration service, is exerting efforts to increase the quota of female recruits and identifying effective trainings and strategies to build the needed capacity of female officers to cope with challenges which hinder their advancement or entry into the security sector." Minister Tarr emphasized.

The actions, according to Minister Tarr, are evidence of the commitment of the Government of Liberia under the Leadership of His Excellency President George Manneh Weah to the Women, Peace and Security agenda; especially ensuring women's inclusion and full participation in the security sector.

Minister Tarr cautioned that until women are a significant part of peace initiatives-- whether peace-making or peace-building; the processes would be incomplete and non-durable. The Gender, Children, and Social Protection Minister then called for more specialized training for women at every level of the security sector to enhance women's active role in peace and security. Minister Tarr was speaking on Tuesday, October 29, 2019, when she addressed the United Nations Security Council Open Debate on Women Peace and Security on the theme: “Towards the Successful Implementation of the Women, Peace and Security Agenda--moving from commitments to accomplishments in preparation for the commemoration of the Twentieth (20th) anniversary of Security Council Resolution 1325”.

On commitments made by United Nations Members States to the Women, Peace and Security Agenda in April this year-2019, Minister Tarr informed the UN Security Council that the Republic of Liberia had achieved Two of the Six commitments it made--the completion and endorsement of Phase Two of Liberia's National Action Plan (NAP) on Security Council Resolution 1325, and the passage and signing into Law of the Domestic Violence Bill.

Minister Tarr recalled that there were many stumbling blocks to the effective implementation of the first National Action Plan and assured the United Nations that the Government of Liberia, through the Ministry of Gender, Children and Social Protection in collaboration with its  development partners, will endeavor to ensure that Phase Two of the National Action Plan, which is fully aligned with Liberia's National Development Framework, the Pro-poor Agenda for Prosperity and Development (PAPD), will apply the appropriate mechanisms to make for a successful implementation process.

In furtherance of Liberia's adherence to the tenets of United Nations Security Council Resolution 1325; Minister Tarr informed the United Nations that His Excellency Dr. George Manneh Weah, President of the Republic of Liberia had championed a bill for the amendment to Article 80 of the Liberian Constitution in order to provide additional seats for women and other marginalized groupings.

Said Minister Tarr: "In furtherance of our adherence to the tenets of UN Security Council Resolution 1325; His Excellency Dr. George Manneh Weah, President of the Republic of Liberia, in his advocacy for advancing women in political leadership, championed a bill for the amendment to Article 80 of the Liberian Constitution in order to provide additional seats for marginalized groupings to include women, persons living with disabilities and youths. This will allow for Fifteen seats for women in the Senate as per political sub-divisions, and only female members of political parties shall qualify to contest these seats. There will be four specialized seats in the House of Representatives for the elections of persons living with disabilities and for youth between ages 18-24 years. Though there are hindrances as with everything that comes with change, we remain optimistic that this will be realized under this administration."

The Liberian Minister observed that as it is with many development initiatives, the promotion of women’s active participation in the security sector is marred by various factors; including inadequate financial and logistical resources, capacity building, lack of necessary equipment and apparatus and overall support and retention and recruiting due to low financial benefit and incentives.

Minister Tarr averred  that in order to achieve the overall objective of women’s active role in peace and security, "there has to be more specialized training for women in the security sector at every level; the establishment of database for women in decision-making will be key, identifying the gaps between male and female Security officers in decision making in the Security sector, will be useful; and the need for a sustained monitoring and evaluation process will be beneficial".

Minister Tarr then reasserted that the Government of Liberia remains extensively committed to the implementation of international commitments to the United Nations Security Council Resolution 1325 on Women, Peace and Security, and welcomes the adoption on Tuesday, October 29, 2019, of Security Council Resolution S/RES/2493, co-sponsored by Liberia on the full implementation of the Women Peace and Security Agenda.

Minister Tarr concluded by appreciating on behalf of His Excellency President Dr. George Manneh Weah, the Government and People of Liberia, the United Nations and all Development Partners for their consistent and continued support to development efforts and in ensuring the full participation and inclusion of women and girls in the peace and security agenda in Liberia.

In 2020, the world will commemorate the Twentieth Anniversary of United Nations Security Council Resolution 1325, the Twenty-fifth Anniversary of the Beijing Declaration and Programme of Action, and the Tenth Anniversary of the Mandate on Sexual Violence in Conflict, all instruments promoting women's rights, empowerment, inclusion and full participation in all spheres of society.