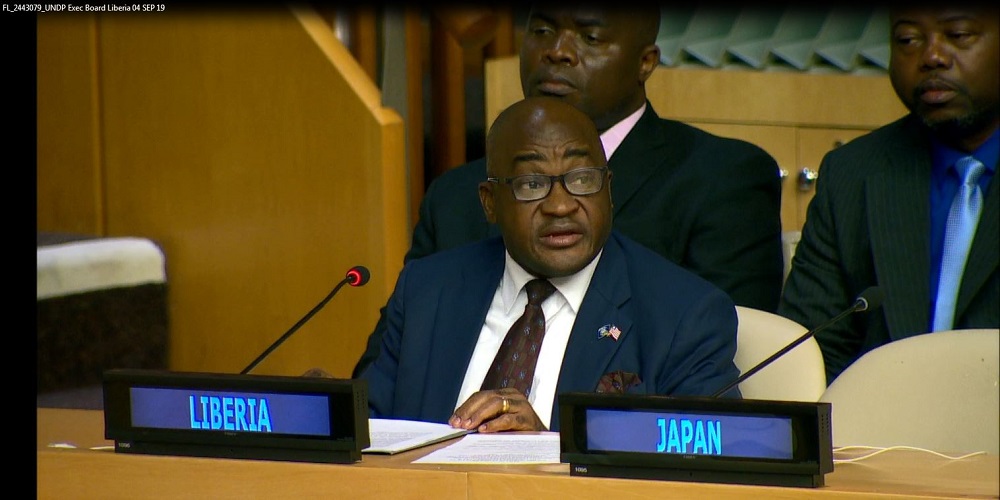 Ambassador Kemayah acknowledged that the Country Programme Document strongly aligns and supports the Government of Liberia's Flagship National Development Agenda – The Pro-Poor Agenda For Prosperity and Development (PAPD); and will serve as a comprehensive and constructive roadmap to aid in the Liberian Government’s delivery for children and women.

Ambassador Kemayah attributed the comprehensive and constructive nature of the Country Programme Document to a participatory and consultative process involving multi-sectoral partners from the Government of Liberia, Civil Society, the United Nations Agencies and other International Development Partners; with the Ministry of Finance and Development Planning (MFDP) of the Republic of Liberia at the helm.

According to a dispatch from the Permanent Mission of the Republic of Liberia to the United Nations, the Liberian Envoy was speaking recently at the Second (2nd) Session of the Executive Board of the United Nations Children's Fund (UNICEF), when the Executive Board considered and approved the 2020-2024 UNICEF Country Programme Document for Liberia.

The UNICEF 2020-2024 Country Programme Document for Liberia will prioritize interventions in immunization, nutrition, water, sanitation and hygiene, education, child protection, and birth registry; areas that Ambassador Kemayah considers as critical for Liberia as the country makes strides to turn the aspirations of the Convention on the Rights of the Child into tangible realities.

Said Ambassador Kemayah: " As we mark the Thirtieth (30th) Anniversary of the United Nations Convention on the Rights of the Child (CRC); we must view the Country Programme Document for Liberia as a crucial component for turning the aspirations of the Convention on the Rights of the Child into tangible realities. We applaud the renewed emphasis of the Country Programme Document for Liberia on community-based interventions; and the focus on areas in which UNICEF could have the greatest impact; as well as the prevention and resilience nexus. The priority areas of the Country Programme Document for Liberia for the period; 2020-2024; including immunization, nutrition, water, sanitation and hygiene, education, child protection and birth registry are all critical; which, we are optimistic; that; with His Excellency President WEAH’s and the Government’s unflinching commitment; and that of UNICEF; and our other development partners, accompanied by improved and effective coordination, can be successfully overcome."

On behalf of His Excellency President Weah, the Government, and People of Liberia, Ambassador Kemayah fully endorsed and reaffirmed Liberia's commitment to the goals, strategies, structure, and key results outlined in the Country Programme Document for Liberia for the period 2020-2024, and to its vision that “more children from birth to adolescence exercise their rights to survival, development, protection, and participation".

Ambassador  Kemayah then recalled that His Excellency, Dr. George Manneh Weah, President of the Republic of Liberia in a message on the Pro-Poor Agenda for Prosperity and Development (PAPD) in November 2018; pledged that “Over the next five years, we will do a few things and do them well"; and affirmed that the welfare of women and children is one of those few things that the Government of His Excellency President Weah is doing well.

The Liberian Envoy concluded by expressing thanks to UNICEF for its partnership with the Republic of Liberia; noting that it has surmounted many challenges. "For decades, UNICEF has been; and will continue to be an important; and strategic partner in the development process of Liberia. A partnership that has surmounted many challenges - economic downturn; civil conflict; the Ebola epidemic; each, bringing about a shift in its service delivery to respond to each situation in a unique manner and form, and meeting the challenge at hand.  Liberia is still in recovery mode, and UNICEF’s institution of its humanitarian and development approaches, bear testimony to the consistent quality of leadership and performance of UNICEF and its country office in Liberia." Ambassador Kemayah emphasized.