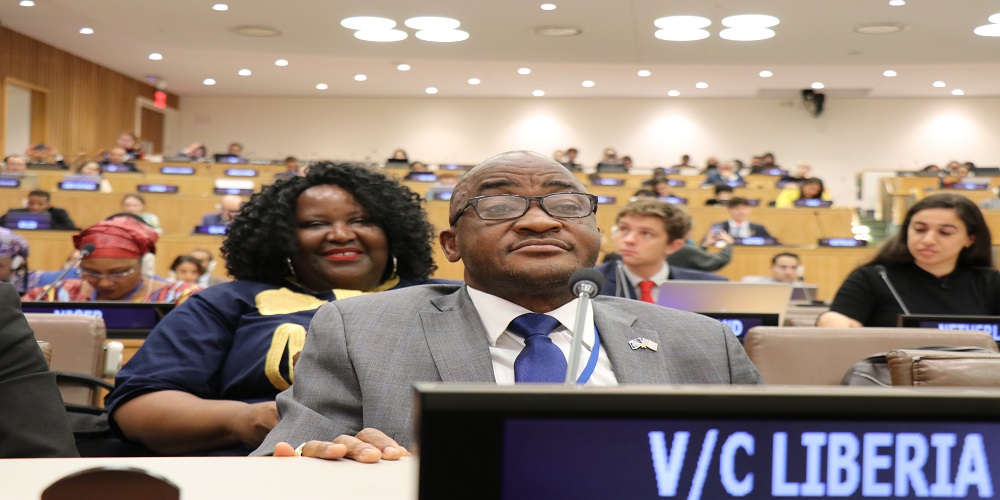 Liberia's Ambassador Extraordinary and Plenipotentiary and Permanent Representative to the United Nations His Excellency Dee-Maxwell Saah Kemayah, Sr. says the Government of Liberia is on a consistent incremental path to ensuring a sustainable and inclusive process on social development; especially addressing poverty and inequality.

Addressing the Plenary Session of the United Nations Committee on Social, Humanitarian and Cultural Issues (Third Committee) on Wednesday, October 2, 2019, Ambassador Kemayah said the Government of Liberia is institutionalizing policies, programs, and legal frameworks to address social development issues, with the aim of “leaving no one behind”; and made specific reference to the Government's National Development Agenda--the Pro-Poor Agenda for Prosperity and Development (PAPD).

Ambassador Kemayah asserted that the Pro-Poor Agenda is premised on four development pillars-- Power to the People, The Economy and Job Creation, Peace Sustenance, and Good Governance and Transparency; and identifies social protection as a key aspect to address vulnerabilities and poverty in Liberia.

As evidence of its commitment to ensuring social protection, the Liberian Envoy informed the United Nations that the Government of Liberia instituted social safety nets interventions to aid in food security and access to health and education for the most vulnerable.

Said Ambassador Kemayah: "The Government of Liberia has instituted the Social safety nets interventions, which include cash transfer, in-kind food transfer such as school feeding, take-home rations, and nutritious supplementary feeding and food distribution; as well as general food and utility subsidies. These have aided in food security, facilitated access to health and education for the elderly, women and children; and enabled the working poor to access improved incomes and the youth entrepreneurial opportunities."

On the Health Sector, Ambassador Kemayah said "the health of the Liberian population takes central stage in the Government’s Pro-poor Agenda; with eight clearly articulated high-level targets; including maternal and child mortality reduction; reduction of malnutrition for children less than five (5) years; expansion of health care services to people beyond five (5) kilometers radius of the nearest health facilities; consistent provision of medicines and medical supplies to all public health facilities; and reducing high ‘out of pocket’ payment on households".

The Liberian Envoy also expressed the Government's commitment to achieving Universal Health Coverage (UHC) as demonstrated by efforts towards achieving the Abuja Declaration, which calls for fifteen (15) percent of the national budget to be allocated to health. "It is worth mentioning that the Government of His Excellency President Weah is very close to achieving this milestone, sitting at 14.3 percent, the highest in the ECOWAS Region. " Ambassador Kemayah emphasized.

In furtherance of the Government's commitment, Ambassador Kemayah disclosed that the Ministry of Health in collaboration with Development Partners is working to accelerate the Universal Health Coverage (UHC) agenda through the development of a “Pro-Poor Agenda for Health, a Roadmap to Universal Health Coverage and Health Security”-- a mechanism  intended to provide the marching order for the acceleration of Universal Health Coverage (UHC) in Liberia up to 2023. "It seeks to strengthen the public health system to reduce the high maternal and neonatal deaths in the country by increasing skilled health workforce, improving technical capacities; including the training of specialized doctors; locally and internationally; expanding health facilities network; while improving existing ones; improving diagnostic services and ensuring consistent availability of medicines and supplies; and to institute a sustainable health financing program for the country." Ambassador Kemayah explained.

Ambassador Kemayah named the strengthening of partnership as key to achieving Universal Health Coverage: "Being cognizant that achieving Universal Health Coverage (UHC) and the Sustainable Development Goals (SDGs) cannot be done in silos; our Government continues to galvanize multilateral efforts, collaborate, mobilize resources, and share lessons learned and best practices; and build partnerships that include Public-Private Partnership at global level; and strengthen coordination and alignment at the national level."

The Liberian diplomat to the United Nations hailed the Secretary-General’s call to the United Nations System and its Development Partners to scale up financial and technical assistance to low and middle-income countries and support Governments’ efforts; as well as directing international cooperation towards facilitating the mobilization of additional resources in order to improve the quality of healthcare, education and water and sanitation.

Ambassador Kemayah then reassured the United Nations of the commitment of His Excellency President Weah and the Government of Liberia to ensuring social development for all Liberians. "In closing, Mr. Chair, I’m pleased to inform this body that His Excellency President Weah, the Government and People of the Republic of Liberia are on the right trajectory; and remain ever committed to implementing the core objectives of the Copenhagen Declaration on Social Development; and the World Summit for Social Development with the aim of achieving inclusive and sustainable economic growth that will ultimately result in improving the lives of all Liberians." Ambassador Kemayah concluded.

The Third Committee deals with agenda items relating to a range of social, humanitarian affairs and human rights issues that affect people all over the world.

As in previous sessions, an important part of the work of the Committee for the Seventh-fourth Session of the United Nations General Assembly (74th UNGA) will focus on the examination of human rights questions, including reports of the special procedures of the Human Rights Council which was established in 2006.

The Third Committee will hear and interact with special rapporteurs, independent experts, and chairs of working groups as mandated by the Human Rights Council.

The Committee will also discuss questions relating to the advancement of women, the protection of children, indigenous issues, the treatment of refugees, the promotion of fundamental freedoms through the elimination of racism and racial discrimination, and the right to self- determination.

Ms. Farngalo chaired a portion of the Third (3rd) Plenary Session of the Committee on Wednesday, October 2, 2019. The Session considered important social development questions such as issues related to youth, family, ageing, persons with disabilities, crime prevention, criminal justice, and international drug control; as well as the outcome of the World Summit on Social Development and the Copenhagen Declaration on Social Development.