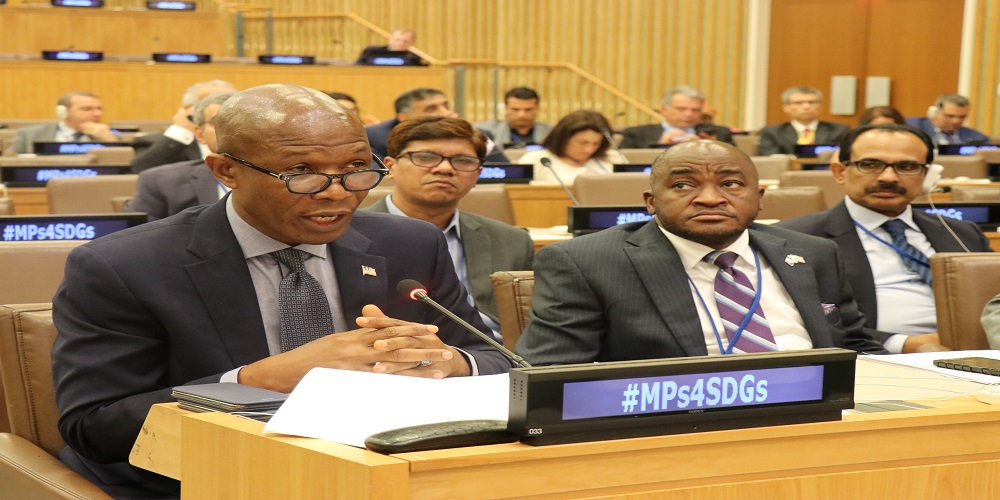 The Speaker of the House of Representatives of the Republic of Liberia, Dr. Bhofal Chambers says there is a need to foster balanced global partnerships that serve the best interest of humanity and promote equality and inclusiveness.

Dr. Chambers observed that asymmetrical approaches to global partnerships-- where smaller and developing countries are often at a disadvantage have led to Countries remaining poor, despite possessing vast natural resources.

Citing the Republic of Liberia as a case, Dr. Chambers said the country is endowed with huge natural resources, but not benefitting much, economically, in comparison with other countries with similar resources.

Said Speaker Chambers: "Look at logging, Germany gets up to 170 billion United States dollars annually from logging. Liberia has forest; we have logs; how is it possible in Germany and it's not possible in Liberia? We have to look at a new dimension to see how we can all be stakeholders and meaningful stakeholders. It's a thing of the past that we always receive, but we actually give more than we are receiving. I want an inclusive approach by all stakeholders, where big and small countries can work together so that the people can benefit. We have to have impactful cooperation so that humanity's best interest can be served."

Dr. Chambers then encouraged parliamentarians around the world to engage in an honest dialogue about inclusiveness and equality, and employ a sense of humanity as they strive to enact legislation such as those that that are making developed countries to thrive meaningfully.

Speaker Chambers was speaking at the United Nations Headquarters in New York on Monday, July 15, 2019, at a Parliamentary Forum, organized by the International Parliamentary Union (IPU); as part of the High-Level Political Forum on the Sustainable Development Goals.

The Forum was organized to give parliamentarians from across the world an opportunity to discuss the main theme of the 2019 Session of the High-Level Political Forum: “Empowering people and ensuring inclusiveness and equality”, and exchange experiences on the implementation of the Sustainable Development Goals.

In a related development, Liberia's Ambassador Extraordinary and Plenipotentiary, and Permanent Representative to the United Nations, His Excellency Dee-Maxwell Saah Kemayah, Sr., and his wife--Reverend Mrs. Dialokai Golanyon-Kemayah, on Monday, July 15, 2019, tendered a welcome reception in honor of Speaker Chambers as head of the First Branch of the Liberian Government---the Legislature, and in recognition of his service to Liberia.

Stressing that "he will leave no stone unturned"; Ambassador Kemayah reaffirmed his unflinching practical commitment to ensuring that the Pro-Poor Agenda for Prosperity and Development--the vision of His Excellency Dr. George Manneh Weah, President of the Republic of Liberia is achieved.

In response, the Speaker of the Liberian Legislature Hon. Dr. Bhofal Chambers expressed appreciation to  Ambassador Kemayah and his wife for the very warm welcome and reception tendered in his honor.

He assured of the Legislature's support to the Foreign Service to ensure that the Republic of  Liberia is ably represented in the Comity of Nations.