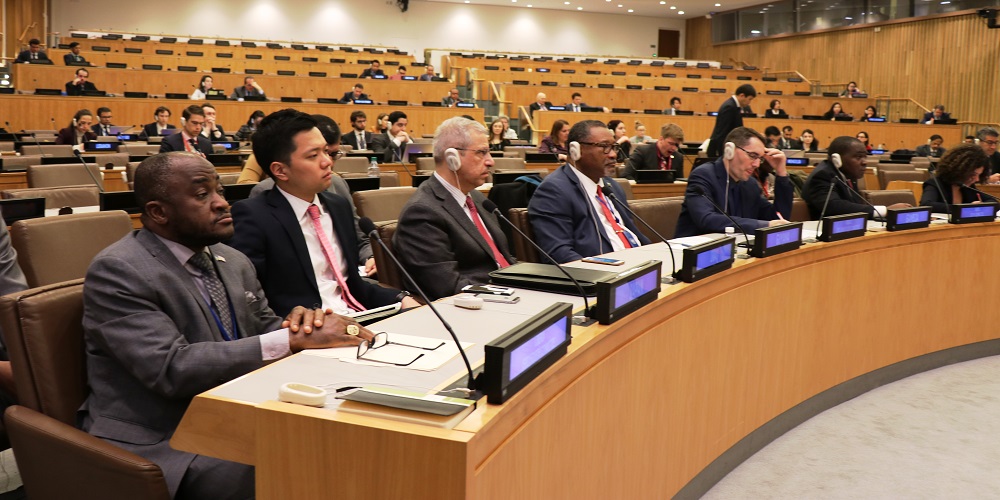 Presenting the report of the Fourth Committee, Ambassador Kemayah noted that during the main part of the Seventy-third Session (73rd) of the United Nations General Assembly (Sept-December 2018), the Committee held all of its planned meetings and considered Thirteen (13) substantive agenda items; including the triennial item on “University for peace”, and adopted proposals after the conclusion of the general debate on the item or cluster of items.

Said Ambassador Kemayah: "We maintained the practice of considering the Five (5) decolonization items in a clustered manner; with a joint general debate; followed by joint action on all draft proposals submitted under these items. Separate general debates were held on the United Nations Relief and Works Agency for Palestine Refugees in the Near East (UNRWA) and ‘Israeli practices’; and action was taken on the draft proposals submitted under both items at the same meeting. The Committee also continued its practice of holding interactive dialogues with high-level representatives of the Secretariat and heads of agencies before beginning the general debates on its agenda items. As Chair, I consistently encouraged delegations to actively participate in these interactive dialogues and “Q & A” sessions with unscripted questions and comments, and to limit their interventions to 2 - 3 minutes.  This was effective, and I think it is still possible to do".

On the Fourth Committee's unique practice of hearing petitioners’ (individuals or representatives of organizations), who speak on any of the Seventeen (17) Non-Self-Governing Territories under its decolonization cluster, Ambassador Kemayah reported that the steady increase in the number of petitioners from Western Sahara in recent years has proven to be a challenge in terms of both logistics and time management. He noted that the Committee had to revise its Program of Work to convene two (2) additional meetings to accommodate the increase in the number of inscriptions to the joint general debate on decolonization items.

On behalf of the Fourth Committee, Ambassador Kemayah welcomed the decision by the General Assembly, to webcast the open meetings of the Committee during the Seventy-third (73rd) Session, thus contributing to transparency, while also serving as a useful reference source.

In compliance with UNGA resolution 72/313, Ambassador Kemayah mentioned the successful use of electronic functionalities offered via the e-deleGATE platform; including e-Sponsorship, e-Speakers, e-List of Participants, and the Fourth Committee Place, and PaperSmart services, which was used to post statements and reduce paper wastage. These facilities contributed to cost-saving measures, reduction of environmental impact and improved distribution of documents during the session.

On the critical issue of time management, Ambassador Kemayah reported that statements in the general debate on the various agenda items were limited to Fifteen (15) minutes when delivered on behalf of groups of Member States, and Ten (10) minutes for individual delegations. Statements by petitioners were restricted to Four (4) minutes, with the microphones being automatically cut off after the time limit had expired. He further explained that the use of the flashing light on the speakers’ microphones when one minute remained also proved to be helpful in ensuring that interventions from the floor did not exceed the time allocated to speakers. These measures, according to Ambassador Kemayah, enabled the Committee to conclude the consideration of its agenda items within the parameters of its time table for this session.

Along the same line, Ambassador Kemayah stressed the importance of convening meetings on time, noting that such must be largely driven by the head of a Bureau, the Chair.

In the case that the increase in the number of petitioners and delegations requesting to address the Fourth Committee continues, Ambassador Kemayah stressed that it was important to further review the working methods of the Fourth Committee; especially those relating to established time limits for statements.

Considering the sensitive nature of the work of the Fourth Committee, Ambassador Kemayah cautioned that the Chair must endeavor to discharge his/her function in an impartial manner. "Of course as chair, one must not have a thin skin. You must be open to opinions and make frantic efforts in finding amicable solutions to concerns expressed by member state(s)." Ambassador Kemayah stressed.

The Liberian Ambassador concluded his report by renewing his fullest support for ongoing efforts to further streamline and rationalize the agenda of the United Nations General Assembly and its Main Committees, and assured that the Fourth Committee will continue to examine ways to revitalize its work, as requested by relevant General Assembly resolutions.