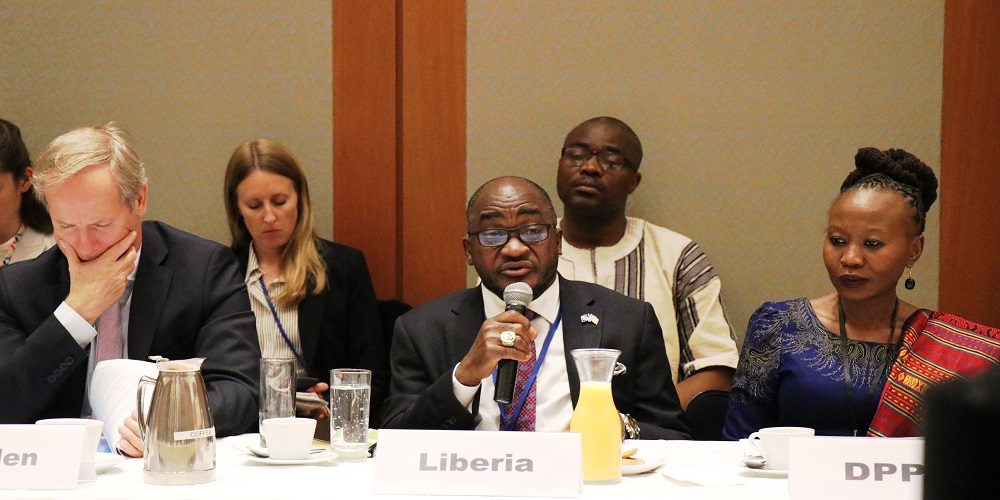 Liberia’s Ambassador Extraordinary and Plenipotentiary, and Permanent Representative to the United Nations, His Excellency Dee-Maxwell Saah Kemayah, Sr., is encouraging the United Nations to keenly consider the political and economic status of a country, before transitioning from peacekeeping to peacebuilding.

Reflecting on lessons learned during the recent transition process in Liberia, Ambassador Kemayah said the transition took place amidst the global fall in the prices of major export commodities of Liberia; thereby strangulating the economy-- a situation that was not adequately prepared for. He also noted that the departure of the United Nations Mission in Liberia (UNMIL) increased the number of unemployed.

Politically, Ambassador Kemayah said it is critical for transition processes to be cognizant of key political events; and endeavor to bridge capacity gaps where there is a need, particularly in the case of a drawdown.  “In the case of Liberia; the drawdown took effect as we prepare for a major and historic election. The security apparatus was not adequately prepared to handle the transferred responsibilities from UNMIL; particularly considering its size”. He emphasized.

The Liberian Ambassador also stressed the importance of having in place the right leadership and the appropriate funding mechanisms during transition processes; coupled with a strong political will, as existed in the case of Liberia; because sustaining peace strongly demands, effective, responsible and accountable management, buttressed by the right capacities and resources.

A dispatch from the Permanent Mission of Liberia to the United Nations quotes Ambassador Kemayah as citing national ownership, and full participation of all stakeholders – women and youth, Government leaders, civil society, as an important factor to ensuring a successful transitioning process.

Ambassador Kemayah then encouraged the United Nations, Stakeholders, and Countries in transition to adopt strategic approaches to address issues ranging from properly diagnosing a conflict to strategies for peace sustenance.

Said Ambassador Kemayah: “We like to again reemphasize, that to ensure the prevention, sustenance, and consolidation of peace, even in the aftermath of conflict, we must adopt the following approach; endeavor to properly diagnose the conflict, objectively investigate the root causes, share information on the root causes, strategize on an ideal global approach for intervening in such conflict, formulate well-structured leadership and management, endeavor to garner and deploy the right resources, encourage strong regional and sub-regional partnership, implement best practices, set realistic timeline and milestones for intervention, make efforts in establishing and supporting the right  infrastructure and institutions; and never lose focus on the huge and immeasurable dividends accountability and transparency bring to the table in peacekeeping and peace sustenance”.

The Liberian Ambassador was speaking at a Roundtable Event on “Challenges and Opportunities in Transition Processes: Lessons learned from Liberia and Best Practices to sustain peace and development beyond mission withdrawal, held at the Permanent Mission of Germany to the United Nations”

Also addressing the roundtable, the Resident Coordinator of the United Nations in Liberia and former Deputy Special Representative of the Secretary-General Yacoub El Hillo, said a minimum of Two (2) years was required to properly implement a transition from peacekeeping to peacebuilding; preparing not just the United Nations, but the Country in transition. Liberia's transition was implemented in Fifteen (15) months, as mandated by the United Nations Security Council.

Although Liberia's transition has been hailed as a success story, Mr. El Hillo cautioned that it was important for the United Nations and the world to look at Liberia through the lens of prevention and provide the needed support to help the Country address remaining economic, political and security challenges.“ When Missions leave, they don’t leave with the problems; the problems remain behind and require support to be addressed”. Mr. El Hillo emphasized.

The UN Resident Coordinator affirmed that the Government of His Excellency Dr. George Weah and the people of Liberia were committed in a sustained way to look at peacebuilding through a development lens, noting that the Government had implemented several of the commitments in the Peacebuilding Plan. He further added that commitments that were not implemented as scheduled were included in the Pro-Poor Agenda for Prosperity and Development, and called for support for its implementation.

Mr. El Hillo used the occasion to thank the Governments of  Sweden, Norway, Germany and the United Kingdom for providing 1.5 Million dollars for the operation of the Resident Coordinator Office in Liberia, bringing more effectiveness and coherence to the work of the United Nations in Liberia.

Sharing his perspective as Chair of the Liberia Configuration, Mr. Skoog said the Security Council's endorsement of the Peacebuilding agenda in Liberia added strength and substance to the work of the PBC and the transition process. The Swedish Ambassador added that Sweden's presence on the United Nations Security Council proved to be an added asset, providing other Council members with a better perspective of the reality in Liberia and influencing positive decisions.

Unlike other Country Configurations, Ambassador Skoog asserted that the Permanent Representative of the Republic of Liberia to the United Nations His Excellency Ambassador Dee-Maxwell Saah Kemayah and the Permanent Mission, continue to be welcoming and constantly interacting with the PBC, in the quest to keep Liberia on the radar of the International Community.

Also speaking, the Chief of Policy, Regional Organizations, and Guidance at the United Nations Department of Political and Peacebuilding Affairs and UN Transition Project, Ms. Roselyn Akombe, stressed that transition from peacekeeping to peacebuilding is not just technical but long term political processes; and require continue engagement to sustain the peace.

In brief welcome remarks earlier, the Deputy Permanent Representative of Germany to the United Nations and host of the roundtable event, His Excellency Jurgen Schulz said the Security Council's mandate of Liberia did not end with the departure of UNMIL. He stressed that the Council will continue to monitor the situation in Liberia, providing political support and sustained attention to ensure that achievements are not lost.

The Roundtable Event on “Challenges and Opportunities in Transition Processes: Lessons learned from Liberia and Best Practices to sustain peace and development beyond mission withdrawal”,  was organized by the United Nations Development Program (UNDP) and the United Nations Department of Political and Peacebuilding Affairs (DPPA), in partnership with the Permanent Missions of Sweden and Germany to the United Nations.  The International Peace Institute moderated the session.

Security Council Members including the United States, China, France, United Kingdom, Belgium, Germany, and Equatorial Guinea, were among participants at the roundtable event.