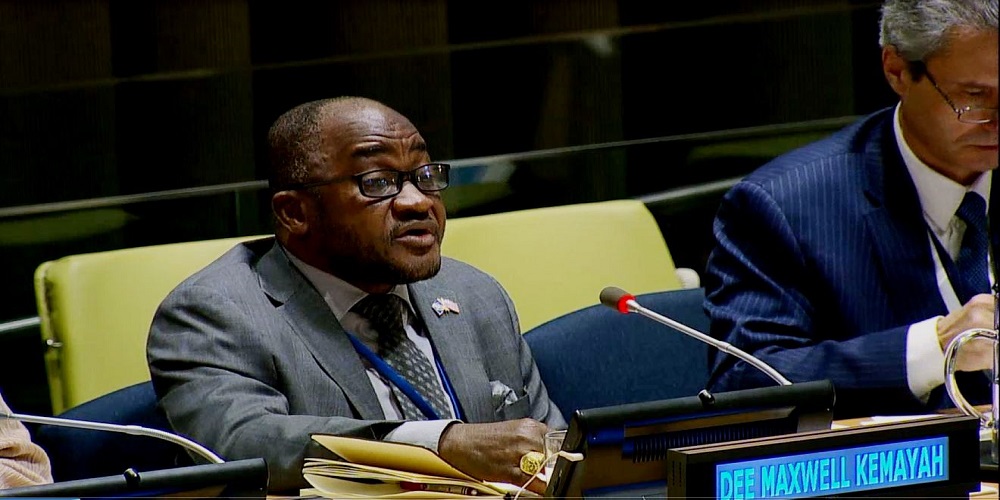 Liberia's Permanent Representative to the United Nations, His Excellency Ambassador Dee-Maxwell Saah Kemayah, Sr., says the Republic of Liberia is an important and notable example of what peacebuilding and sustaining peace truly reflects in practice.

Serving as a panelist at a United Nations General Assembly Informal Interactive Dialogue on Peacebuilding and Sustaining Peace, Ambassador Kemayah said that Leadership in the transition  process from peacekeeping to peacebuilding was pivotal; noting, in the Republic of Liberia, the process was clearly articulated in terms of rationale and timeline; thereby enhancing a better coordination between the Government of Liberia and the United Nations System.

Sharing the Liberian experience, Ambassador Kemayah further emphasized the importance of a multi-faceted approach that involves all stakeholders, political will from Member States, and national ownership in transitioning from peacekeeping to peacebuilding and peace sustenance.

Said Ambassador Kemayah: "Unlike the traditional approach to mitigating conflict and sustaining peace, today's realities obligate the United Nations and its Member States to view and deal with conflict from a different, yet positive perspective. As global actors, we ought now to be preoccupied with, first endeavoring to properly diagnosed conflicts, investigating the root causes, sharing information on the root causes, strategizing on an ideal global approach for intervening in such conflict, formulating well structured leadership and management, endeavoring to garner and deploy the right resources, encouraging strong regional and sub-regional partnership, implementing best practices, making efforts in establishing and supporting the right  infrastructure and institutions; and never losing sight on the huge and immeasurable dividends accountability and transparency bring to the table in peacekeeping and peace sustenance."

He hailed the role of the United Nations Peacebuilding Commission (PBC) in Liberia's transition; stressing that it continues to prove to be a long-standing and reliable partner to the country; supporting both the transition and the strengthening of  UN system-wide coherence and strategic and operational partnerships.

Among others, the Liberian Diplomat mentioned that the Republic of Liberia is now benefiting from a strengthened Resident Coordinator’s Office – essential to ensuring the UN’s good offices role, maintaining partnerships with political and civil society networks, as well as with the Government of Liberia and the international community.

He also recalled the establishment of the Liberia Multi-Partner Trust Fund (LMPTF); the provision of sustained and catalytic funding to Liberia, totaling Sixty-five Million US Dollars; support to the Government of Liberia's priorities in the Pro-Poor agenda for Prosperity and Development (PAPD), including the launching of the Agenda at the United Nations;  and the adoption of a gender strategy; as  major initiatives of the Peacebuilding Fund (PBF) in support of sustaining peace in Liberia.

Ambassador Kemayah expressed immense pleasure that "the PBC, from all indications, is committed to strengthening the partnership with the Government of Liberia under the astute leadership of His Excellency Dr. George Manneh Weah, to ensure that key structural reforms are implemented; noting that these reforms will endeavor to address the root causes of the conflict experienced by Liberia".

He expressed appreciation to Sweden as head of the Liberia Configuration of the Peacebuilding Fund for its support and assured that the Republic of Liberia looks forward to working with the PBC and the Peacebuilding Support Office to consolidate efforts for national development; stressing that Liberia peacekeeping success story will not be sustained without national development.

During an interactive discussion that followed, several UN Member States including Sweden, Japan, and Sudan spoke positively of Liberia's transition from peacekeeping to peacebuilding and praised Ambassador Kemayah's contribution to the Dialogue.