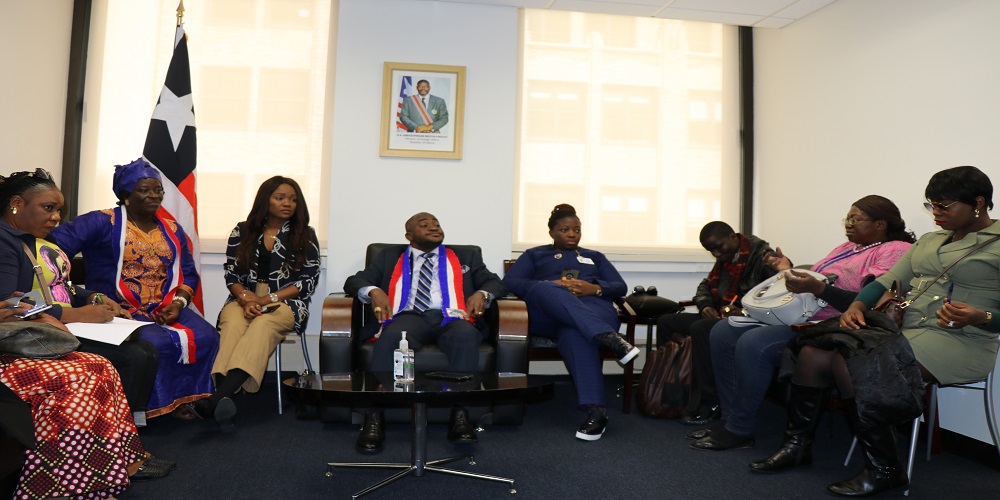 Civil Society Organizations(CSOs) and Inter-Governmental Organizations that attended the just ended Sixty-third (63rd) Commission on the Status of Women (CSW63) in New York,  have hailed the Government through the Ministry of Gender, Children and Social Protection for the level of collaboration throughout the conference.

The organizations expressed gratitude for their inclusion on the Government's delegation, an action that granted them access to a diverse range of meetings; including plenary sessions and negotiations of the Commission on the Status of Women; as well as side events organized by various delegations and organizations. Many of the CSO representatives asserted that the platforms provided an opportunity to share the Liberian experience from the civil society perspective and learn from the stories of others from across the African region and the world.

Unlike previous years, representatives of the Civil Society Organizations said the Ministry of Gender, Children and Social Protection was proactive throughout the process of planning for the CSW63 and ensured access to information relating to the conference; especially through the use of social media--'Whatsapp'.

They pledged their willingness to work with the Ministry of Gender, Children and Social Protection to further promote the issue of women's rights and gender equality, highlighting issues that need to be addressed, when necessary.

Rounding up the views, the National Chairperson of the National Civil Society Council of Liberia,  Madam Frances Greaves,  said the CSOs were aware of the critical importance of partnering with the Government; stressing that such collaboration would ensure that development frameworks are implemented at the community level.

She expressed the hope that the Government led by His Excellency Dr. George Manneh Weah, would work towards strengthening the implementation of the Liberia CSO- Government Partnership Framework signed in 2016. The framework, according to Madam Greaves, encourages Government Ministries and Agencies to partner with Civil Society Organizations working in the sector that they are responsible for.

Madam Greaves also used the occasion to thank Ambassador Kemayah for opening up his office and providing all delegates full access, despite affiliation; an act she described as unprecedented.

For her part, Attorney Tonia Wiles, Commissioner of the Independent National Commission on Human Rights (INCHR), said the Republic of Liberia scored a big mark for including representatives of the Commission and CSOs on its delegation.

Atty. Wiles said the INCHR as an independent Inter-Governmental body was available to work with the Ministry of Gender, Children and Social Protection; especially concerning issues affecting women and children.

Representatives of the CSOs and Inter-Governmental Organizations spoke during a meeting called by the Permanent Representative of Liberia to the United Nations, His Excellency Ambassador Dee-Maxwell Saah Kemayah, Sr., to strengthen the collaboration between the Ministry of Gender, Children and social protection, and CSOs.

Ambassador Kemayah said, while Liberia's participation at the CSW63 was remarkable, it was important to sit and evaluate, in order to draw on lessons learned  before the next Commission on the Status of Women (CSW), in March 2020.

He encouraged CSOs to constructively engage the Government on issues that will improve the livelihood of women and girls. Ambassador Kemayah stressed that  "women have been marginalized for too long, and moving forward will require the collective efforts of the Government, the CSOs and other stakeholders".

In response, the Minister of Gender, Children and Social Protection thanked Ambassador Kemayah for bringing the group together to discuss for the good of Liberian Women and the Country as a whole.

Minister Tarr said she was aware that her actions as Minister could take the fight for women's rights and gender equality in Liberia "forward or backward", and was open to working with everyone to ensure that the fight for gender equality doesn't retrogress. " Ours is an open leadership. We welcome ideas from everyone. What is the suggestion outside of what we already have? Let's brainstorm and come up with answers." She emphasized.

The Gender Minister assured that issues of women's right were very dear to His Excellency President George Manneh Weah, who is Feminist-in-Chief.  Minister Tarr disclosed that the President would like to meet with the women of Liberia, but stressed that it was important to first hold a meeting as women, to set priorities before meeting the President. "

Said Minister Tarr: "In this new dispensation, it's important for Liberian women, young and old to come together and talk about what we want to see going forward...What do we want from the President? With that, we can have a structured document, that focuses on our needs to present when we meet the President.  I can commit to you all, that for us, it is about seeing women's issues advanced positively. "