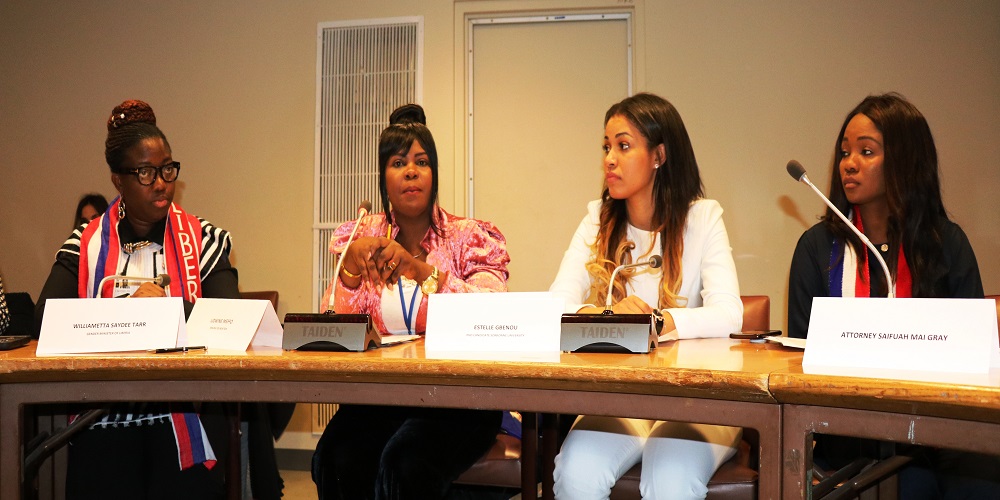 The Government of Liberia, in partnership with the Barefoot College of India, is planning to open a Vocational Training Center at the Grand Bassa Community College, for the training of rural women in the use of solar energy.

The Center, when established will train on an annual basis, twenty (20) women living in rural areas as Solar Energy Technicians. The Government through the Barefoot College of India, had previously recruited and trained in India, eleven (11) rural grandmothers in the installation and maintenance of solar power system.

Making the disclosure when she served as a panelist at a Commission on the Status of Women (CSW) side-event on 'Energy Law' in Africa, the Minister of Gender, Children and Social Protection of the Republic of Liberia, Hon. Williametta Saydee-Tarr said the plan was part of policy efforts taken by the Government to address the low representation of women in the Energy Sector.

Minister Tarr argued that despite the significance of the energy sector to all aspects of society, it remains one of the least gender-diverse sectors in Liberia and globally, as a result of systemic challenges, such as "cultural imbalances, limited access to infrastructure and lack of women leadership in major roles".

According to a dispatch from the Permanent Mission of Liberia to the United Nations, the Liberian Minister of Gender encouraged all governments and institutions to develop policies that would lead to concrete solutions to address the harsh reality of under-representation in the Energy Sector.

For Liberia, the Minister said the political will to move forward is clear. " We have sitting on this panel today, the Chief Executive Officer (CEO) of the National Oil Company of Liberia (NOCAL), who is a young dynamic female leader. We have a President who has dubbed himself "Feminist in Chief", and has directed his government officials to make a priority the inclusion of women in all sectors of our economy".

Minister Tarr spoke of other policy initiatives being taken by the Government to bridge the  gender gap; including the “Gender and Social Inclusion Project”, which aims to  mainstream gender issues in policies and guidelines of Ministries, Agencies and Commissioners (MACs) through capacity building and establishment of gender units at the Liberia Electricity Cooperation, Ministry of Mines and Energy, and Ministry of Public Works. The project is being supported with funding from the Millennium Challenge Corporation’s Compact.

Also serving as a panelist, the Chief Executive Officer and President of the National Oil Company of Liberia Attorney Saifuah Mai Gray spoke of the revision of the Petroleum laws of Liberia, leading to the separation of regulatory and commercial functions of the entity.  Under the new law, NOCAL handles commercial matters and the Liberia Petroleum Regulatory Authority handles regulatory matters.

Attorney Gray said Liberia is still in the exploration stage but was already investing in human capital-- training technicians and managers to effectively and efficiently administer the sector.

Attorney Gray who was appointed in 2018 told the forum that NOCAL had faced several challenges during the past administration and was in the process of restructuring and rebranding to respond to questions of transparency, exclusiveness and Health and Safety". As part of the restructuring and rebranding process, the NOCAL boss disclosed that a ten (10)  year forensic audit would be done.

Other Panelists from The Gambia, Nigeria, Mali, France and the United States of America also shared best practices at the "Energy Law in Africa" side event.

Delivering closing remarks at the event, the Permanent Representative of Liberia to the United Nations His Excellency Dee-Maxwell Saah Kemayah, Sr. described the Energy Sector as a very indispensable resource for the growth and development of the African Continent.

He stressed that in the absence of energy it is difficult for investors to come to any country, and drive the necessary industrial developments for a vibrant economy.

Ambassador Kemayah encouraged the organizers and participants to consolidate efforts to go beyond the dialogue at the United Nations and take practical steps in Countries in Africa. He extended an invitation to the organizers to visit Liberia as their next stop, as they strive to influence the process of developing effective energy laws for Africa.

The "Energy Law in Africa" side event was organized by the Doctoral School of Public Law, La Sorbonne University in Paris, France, in collaboration with the Permanent Mission of The Gambia to the United Nations.

The Side Event was organized to highlight Sustainable Development Goal Seven (7): "Affordable and Clean Energy", with the aim of providing a platform to share good practices, challenges and opportunities; while influencing the evolving development of energy law across the country.