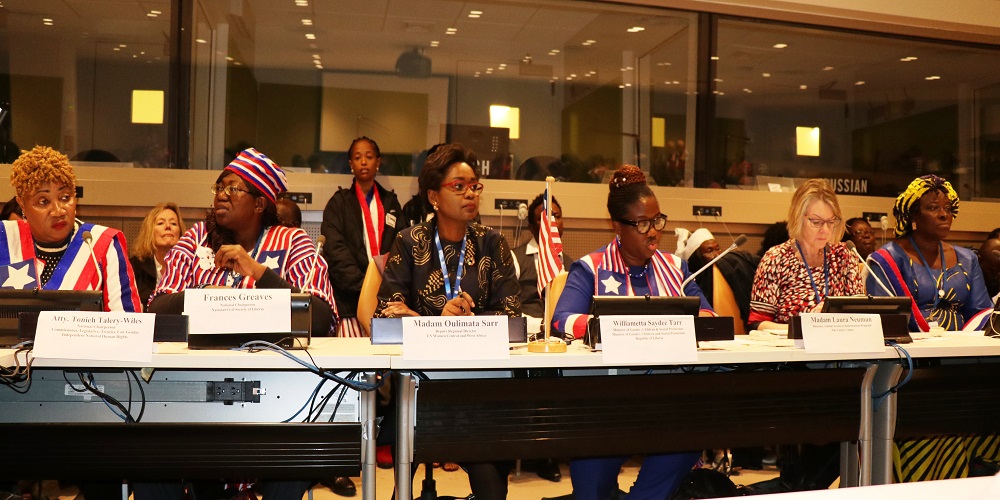 The Government of Liberia on Thursday, March 14, successfully hosted a Side Event as part of its participation in the Sixty-third (63rd) Session of the Commission on the Status of Women (CSW63).

The Event held on the theme, “Changing Women’s Lives Through Cash Transfers”; featured a documentary showcasing the impact of social cash transfers on the lives of women living in rural communities in Liberia. In the documentary, beneficiaries including women and a visually impaired man spoke of how the program transformed the lives of they and their children.

Welcoming guests at the well-attended Side-Event,  the Minister of Gender, Children and Social Protection, Hon. Williametta Saydee-Tarr explained that the social cash transfer program was piloted in 2010 with the support of the European Union and the United Nations Children's Fund (UNICEF), and benefitted over Three Thousand (3,000) households in two (2) of the poorest counties in Liberia.

According to Minister Tarr, the mid-term evaluation of the program conducted by the Center for Global Health and Development at Boston University in June 2012 titled “External Evaluation of the Bomi Social Cash Transfer Pilot Final Report” demonstrated the significant impact of cash transfer on households, improving their livelihood and food security; thus, the Government of Liberia implored significant efforts to ensure that gender perspectives are mainstreamed in its National Development Plan--the Pro-poor Agenda for Prosperity and Development launched in 2018.

A dispatch from the Permanent Mission of Liberia to the United Nations quotes Minster Tarr as saying that "evidence shows when women have access to, and control over resources, they are more likely to invest in their families and communities; prioritizing health, nutrition, and education of their children, even with scarce resources".

Providing more information on the Social Cash Transfer Program in Liberia, Deputy Minister Sherman said the Government of Liberia has secured a 10 Million Dollar Loan from the World Bank and a grant of 6.5 Million US dollars from the United States Agency for International Development (USAID) to extend the program to two more Counties. She explained that all of the mechanisms are in place to fully monitor the implementation of the program, ensuring that money disbursed to vulnerable households are used for the intended purpose.

Deputy Minister Sherman said under the new program, the cash transfer amount will be increased to accommodate other accompanying social protection components including health and nutrition.

For her part, UN Women Deputy Regional Director for Central and West Africa Ms. Oulimata Sarr thanked the Government of Liberia for the progress made in catering to the needs of the most vulnerable through cash transfer and encouraged  Governments in Africa and globally to consider comprehensive economic empowerment of women.

According to Madam Sarr, while Social Cash Transfer was important and helping to change lives, a holistic approach that puts women at the center of economic development would help better address poverty, a vice she described as a threat to peace.

She spoke of the UN Women initiative in Africa "Women Economic Empowerment Through Climate Resilient Agriculture" program, as an important tool to bridge the social protection gap between women and men. The initiative, according to Madam Sarr, highlights the issues of land rights and ownership, skills development and application, access to finance at a large scale, and access to market.

She lamented that for too long women have had the same conversation and stressed that it was time to fully move forward with men as partners. "For many years, we have been doing our advocacy alone. We've realized through our He-for-She campaign that we need the participation of our men. We need strong men who will say I stand by my wife, my daughter, my sister. That's the only way we can be able to achieve the SDGs".

The "Changing Women’s Lives Through Cash Transfers” Side Event brought together participants from diverse backgrounds; including the United Nations System, Permanent Missions to the United Nations, Country Delegates attending the CSW63, Civil society Organizations, and Liberians within the United States of America.