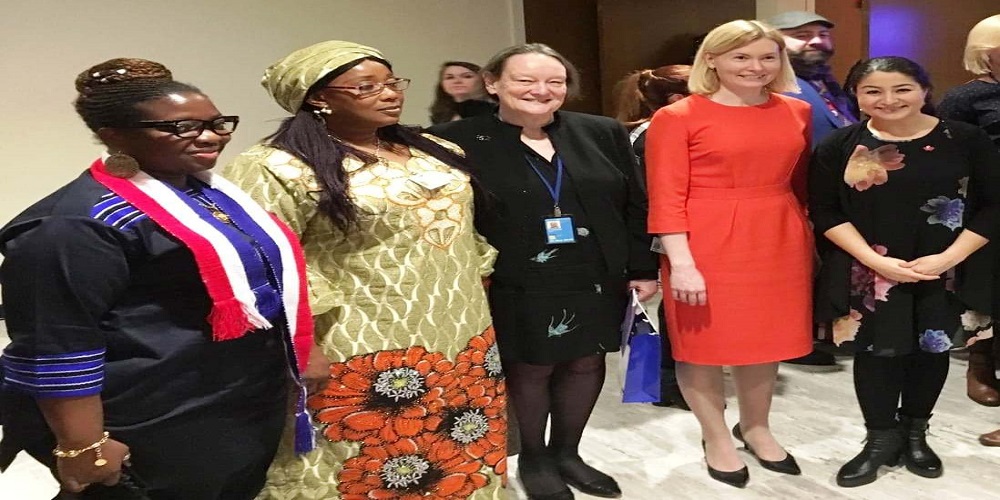 Liberia's Minister of Gender, Children and Social Protection, Honorable Williametta Piso Saydee-Tarr has described modern technologies as an important tool in the strive to prevent Sexual and Gender-Based Violence (SGBV) nationally and globally.

Minister Tarr spoke of the positive effects of Information Communication Technology (ICT); especially social media platforms, on Sexual and Gender-Based Violence (SGBV); stressing that they continue to be effective for awareness creation, reporting of cases and 'calls to action'. She, however, cautioned that they could also be used negatively, causing more harm to victims.

Serving as panelist Monday at a Commission on the Status of Women (CSW) Side Event organized by the Permanent Mission of Estonia to the United Nations on the Theme: "The prevention of sexual and gender-based violence and the role of modern technologies", Minister Tarr called on Governments and Civil Society actors to endeavor to strike a balance in the use of modern technologies for SGBV prevention, especially the issue of rape. "For us, it is weighing the pros and cons...I think it's very important to include ICT in all that we do to ensure that all issues of Sexual and Gender-Based Violence are eradicated; but it is also important that human beings stay together, stay committed and connected, and work together, not replacing ourselves with the tools".

The Minister of Gender also used the event to share efforts by the Government of Liberia to legally address SGBVs, stressing that Liberia has one of the harshest rape laws in the world, making rape a non-bailable offense. She also named the National Gender Policy, the Children's Law, and the Gender-Based Violence Action Plan as laws that are in place to address Sexual and Gender-Based Violence, and protect children in Liberia.

A dispatch from the Permanent Mission of Liberia to the United Nations quotes Minister Tarr as disclosing that the Liberian Legislature was at the verge of passing another instrument--the Domestic Violence Bill into law. She explained that consultations on the bill revealed the need to include harsher penalties for perpetrators of SGBVs and an Information Communication Technology (ICT) component.

She further disclosed that the issue of Female Genital Mutilation had been removed from the bill, and assured that it would be dealt with separately; in close collaboration with our traditional leaders and elders in local communities.

The Minister said while these efforts by Government was commendable, they would not have wide-reaching effects if the community from where incidents are reported do not work with the Government. She encouraged community members to be robust in helping to prevent SGBVs, reporting cases and facilitating prosecution when necessary.

Minister Tarr was among a panelists of women who addressed the Estonia organized  Commission on the Status of Women (CSW) Side Event.  Other panelists included the United Nations Special Representative on Sexual Violence in Conflict, Ms. Pramila Patten, and Women Ministers from Canada, Sierra Leone and Estonia.

The Minister of Gender, Children and Social Protection is in New York at the head of a high powered Liberian delegation attending the Sixty-third (63rd) Session of the Commission on the Status of Women (CSW63).

Upon arrival in New York, H.E. Dee-Maxwell Saah Kemayah, Sr. welcomed the Minister and delegation  and wished them a successful session. Ambassador Kemayah admonished the delegates to be diligent as representatives of the Government of Liberia; ensuring that their representation is positive and consistent with Government's policy and views; the United Nations is the foremost arena to advance the interests and objectives of a Government, and all actions should reflect that.

The Sixty-third (63rd) Session of the Commission on the Status of Women (CSW63) is convening at the United Nations Headquarters in New York from March 11-22, 2019, on the Theme: Social protection systems, access to public services and sustainable infrastructure for gender equality and the empowerment of women and girls.