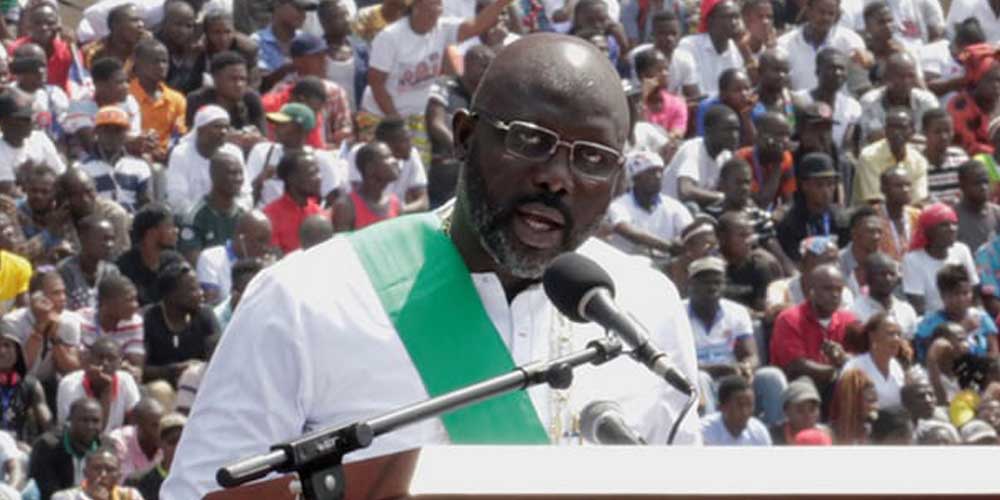 For the first time in more than seven decades, Liberia witnessed the peaceful transfer of power from one democratically elected government to another. See below, the full text of President's Weah Inaugural Address:

Her Excellency, Madam Ellen Johnson Sirleaf
Excellency Head of States
Ambassador Joseph Nyumah Boakai
Hon. Jewel Howard-Taylor
Vice President of the Republic of Liberia
The Governing Council of the Tripartite Coalition for Democratic Change (CDC)
Madam Clar M. Weah
First Lady of the Republic of Liberia
His Honor, the Chief Justice, and Associate Justices of the Supreme Court of the Republic of Liberia
Speaker and Members of the House of Representative
The Honorable Pro-Tempore and Members of the Liberian Senate
The Dean and Members of the Cabinet
The Special Representative of the UN Secretary-General and other Representatives of the United Nations
The Doyen and Members of the Diplomatic Corps
International Partners and Political Stakeholders
Our Religious Community and Traditional Council, Market Women, the Student Body, the Fourth Estate
Special Guests
Distinguish Ladies and Gentlemen
My fellow citizens, I am humbled and thankful for the trust and hope you have put in me. I am filled with joy and pride to see so many friends from across the world join us in celebrating what is truly an historic moment for our country. To all our citizens and international guests, we thank you for coming.
I have spent many years of my life in stadiums, but today is a feeling like no other. I am overwhelmed with the crowd and the energy here today, and I guarantee you, when we finish, there will not be a winning or a losing side. Today, we all wear the jersey of Liberia, and the victory belongs to the people, to peace, and to democracy.
The tens of thousands of Liberians here today, and many more in our communities across the country who are listening gathered together around radios in the palava hut, it is to you we are responsible to deliver the change you deserve. Indeed, we must deliver the change that our people need, in order to transform their lives for the better.
I promise to do everything in my power to be the agent of positive change. But I cannot do it alone. First, I call upon the revered institution that host us today and from which the Vice President and I come– The Legislative – our co-equal branch of government, to work with me to create and pass essential laws that are needed to complete the foundation of this nation.

We will do all that is within our power to provide an environment that will be conducive for the conduct of honest and transparent business. We will remove unnecessary regulatory constraints that tend to impede the establishment and operation of business in a profitable and predictable manner.
As we open our doors to all foreign direct investments, we will not permit Liberian-owned businesses to be marginalized. We cannot remain spectators in our own economy. My government will prioritize the interests of Liberian-owned businesses and offer programs to help them become more competitive and offer services that international investors seek as partners.

MY FELLOW CITIZENS:
This victory could not have been possible without the support of the youth of this country, the women of this country, especially those who make their living by selling in the markets. To all of you, I want to say a heartfelt thank you. This is your government!!!
In the famous words of President Abraham Lincoln of the United States of America “...government of the people; by the people, and for the people.”
We could not have arrived at this day without our voices been heard loudly, and all our views, no matter how critical, being freely expressed in an atmosphere void of intimidation and arrest.
This was only made possible by the tolerance of my predecessor, Her Excellency Ellen Johnson Sirleaf, who protected the right to Freedom of Speech as enshrined in our Constitution.
Now, in my turn, I will go further to encourage and reinforce not only freedom of speech, but also freedom of political assembly.
MY FELLOW CITIZENS, LADIES AND GENTLEMEN:
To change the structure of the Liberian economy will require huge investments in agriculture, infrastructure, in human capital, and in technology. We hope our international development partners will assist us in this transformation. Meanwhile, on behalf of all Liberians, I would like to thank the international community for the invaluable contributions they have made to our peace and economic development.

I thank the ECONOMIC COMMUNITY OF WEST AFRICAN STATES, (ECOWAS), for standing with Liberia throughout these years. Many of our West African brothers and sisters shed their blood for Liberians during our conflict. This is a debt Liberians will never be able to repay.
We count these fallen West African soldiers among the martyrs of our history. Without their supreme sacrifices, this day would not have been possible. ECOWAS will continue to play a very meaningful role during my presidency.
I also thank the UNITED NATIONS for the important role it has played in Liberia. We stood with the United Nations at its founding when it was just an idea driven by ideals. Then, in our darkest days, the UN stood by us.
UN peacekeeping missions have ensured unbroken peace within our borders for more than a decade, and will soon demonstrate their confidence in us, by transitioning its task from peacekeeping programs of UN organizations which will continue in key sectors such as education, health, and agriculture.
Ending a peacekeeping mission successfully is something in which all Liberians and her partners should take great pride. We thank all member countries of the United Nations for your support and I promise to continue to build on the success that we have achieved together.
To the Government and People of the UNITED STATES OF AMERICA, we thank you for your strong support over the years.
The Republic of Liberia has a strong historic relationship with the United State of America, which has manifested itself and that relationship will even be stronger under my administration.
To the EUROPEAN UNION, I say thanks to you for your strong partnership with Liberia. European aid has provided critical support for Liberia’s recovery from war, and this continuous support will be important as we forge a new path of transformation.
Without Europe, George Manneh Weah would not be standing here delivering this inaugural address as the 24th President of the Republic of Liberia. It was my success in European football that enabled me to give back to my beloved country. Europe will always have a special place in my heart, and, as President, I intend to strengthen my relationship with the European community for the benefit of all Liberians.

To the PEOPLE’S REPUBLIC OF CHINA, I say “XIEXIE”. Our administration will continue to support the “One-China Policy”. China has emerged as one of Liberia’s most dependable allies.
It is my hope that Chinese-Liberian relationships will grow stronger during my tenure as President.
The Samuel Kanyan Doe Sports Complex, built by the Chinese, where this Inaugural Ceremony is being held, is where I gained my exposure to the football world. It does not only stand as a monument of Chinese friendship toward Liberians, but It also stands as a symbol of peace and reconciliation for the Liberian people.
During our civil conflict, this was a venue that brought opposing factions together during national matches, effectively reconciling them to a single national purpose, Liberia.

And once again today, we stand at this same venue united for one purpose: Liberia. This is time that we put away our political differences to work together in forging a New Liberia, where the affordability of all goods and services will no longer be a luxury to the privileged, but rather a right for all Liberians.
To the AFRICAN UNION, I also say thank you for standing with Liberia over the past several years. Liberia has always had an historic relationship with the AU. As a founding member of the African Union, I look forward to participating with my colleagues at forthcoming summits, where we intend to utilize the resources and expertise of the African Union for the benefit of our country.
To other bilateral and multilateral partners, I say a sincere thank you! The World Bank, Sweden, the United Kingdom, Germany, Japan, Norway, Kuwait, Saudi Arabia, to name too few, have also played important roles in Liberia’s emergence from conflict and will remain critical for the transformation we seek.
MY FELLOW LIBERIANS:
My greatest contribution to this country as President may not lie in the eloquence of my speeches, but will definitely lie in the quality of the decisions that I will make over the next six years to advance the lives of poor Liberians.
I intend to construct the greatest machinery of pro-poor governance in the history of this country. I will do more than my fair share to meet your expectations. I ask you to meet mine, for I cannot do it alone.
Mine is an expectation that you, fellow citizens, will rise up and take control and responsibility for your destiny. That you will look away from the things that divide us, and draw strength and energy from the things that unite us. Mine is an expectation that you will push yourselves to achieve the possibilities that are within your reach. That you will aim to do more for yourselves and expect others to do less.
And mine is a further expectation that you will discover a new sense of fairness and integrity; a new love for country and for each other. A love that will turn public servants and government officials into national champions for change. A love that will bring back home Liberians scattered far and wide across the globe – many of them highly skilled, talented, and experienced – to join us in building a New Liberia.
The sooner we all merge our energies toward cementing these new norms and values, the sooner we will transform our beloved country for the better. In doing so, we must also learn the virtue of patience, and learn to lower our expectations, for I do not promise you quick fixes or miracles.
Instead, my pledge to you today is that my administration, with your help, will make steady and deliberate progress towards achieving the hopes and aspirations that you cherish in your heart for Mama Liberia.
Let me close with these reassuring words from our National Anthem:
“With God above, our rights to prove,
We will over all prevail!!
Long live Liberia, happy land!
A home of glorious liberty, by God’s command.”
May God Almighty bless the works of our hands, and save the State.
I THANK YOU.