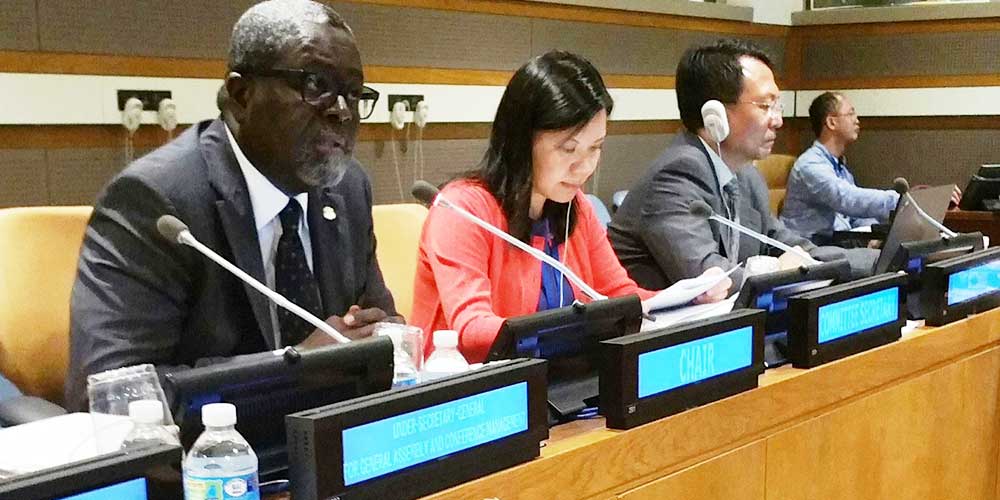 Liberia's Permanent Representative to the United Nations, His Excellency Lewis Garseedah Brown, II has urged the UN to ensure that interventions of its sanction

regime are conducted in a manner that is deemed to be fair and balanced; with the ability to impress upon the national consciousness of affected member states and popular opinion.

Ambassador Brown observed that the imposition of sanctions is not necessarily to demonstrate the enormous powers of the United Nations but rather to assist the lost member state find its way back into the fold of the global family.

He encouraged the United Nations to thoroughly consider what affected countries could learn from sanctions imposed on them and how that could positively impact societies and national lives.

According to a dispatch from Liberia’s Permanent Mission in New York, Ambassador Brown made the assertion when he addressed a meeting at the UN Headquarters on the theme: “Enhancing the Design Process of UN Sanctions: Perspectives from All Stakeholders", organized by the Egyptian Permanent Mission to the United Nations aimed at discussing the enhancement of the UN sanctions design process, including perspectives of previously or currently targeted countries.

Sharing his experience as an “affected person from an affected member state”, Liberia’s top diplomat at the United Nations said sanctions in its purest form, reminds member states that the world is watching and has interest in what they do, noting that there is little doubt that without sanctions, Liberia’s return to civility might have been even more protracted.

“The story of the end to Liberia’s protracted conflict will be incomplete without a chapter deservedly dedicated to the role of the United Nations, its peacekeeping operations and various support mechanisms as well as the imposition of a regime of sanctions spanning more than two decades, which were intended to return a war-wary population to peace and security including in Liberia’s geographic neighborhood," Ambassador Brown emphasized.

He, however, urged that sanctions should not to be trivialized; rather they must be employed, with minimal risks to the long-term interests of the country or people the sanctions ultimately seeks to serve.

In the case of sanctions on individuals, Ambassador Brown urged that care be taken not to impress on a society such as Liberia’s, already trapped by decadent practices of exclusions of its own citizens, that the denial of rights without the required due process of law can be an acceptable practice.

When the sanctions are lifted, the Liberian diplomat urged the United Nations to be ready to assist the country and its people recover its international credibility, its rightful place in the comity of nations and its course of nation building.

He reiterated that Liberia is grateful that the United Nations has not abandoned it in its continued efforts to recover.

The United Nations records the establishment of 26 sanction regimes since 1966 targeting countries including Liberia and non-state actors as a tool for the maintenance of international peace and security.