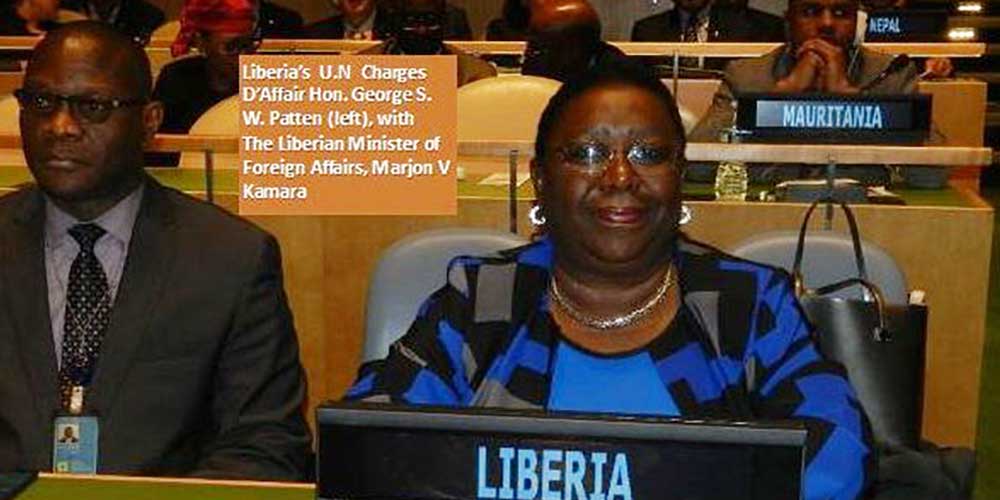 work in the spirit of collaboration to achieve the successful implementation of the Sustainable Development Goals. She said the global coordination in the implementation process of the SDGs was important for the benefit of the present and the future generations .

According to the dispatch from New York , Minister Kamara made the remarks Thursday at the United Nations General Assembly when she represented President Ellen Johnson Sirleaf at the High-level Thematic Debate on Achieving Sustainable Development Goals(SDGs). She said the timing of the debate was appropriate because according her , such debate will afford the Member States the opportunity to revisit issues deemed essential to the realization of the SDGs. In this regard, she said president Sirleaf retains strong commitment and resolve to ensuring that Liberia engages fully in the collective effort to improve lives and livelihoods through the global Agenda.

Minister Kamara informed the audience that the Government of Liberia has been effectively engaged in the SDGs processes and that following the conclusion of the global negotiations, the cabinet reviewed the new agenda and endorsed the proposal for the alignment of the Liberian national development plan , Agenda for Transformation (AFT).

Speaking further , Minister Kamara intimated that the SDGs was launched in Liberia in January 2016 , which brought together representatives from the three branches of the Government as well the media , academia ,women and youth organizations, the private sector and the civil society. ” The event provided the opportunity for an exchange of views on the role of all stakeholders in the implementation of the agenda , and promotion of national and local ownership”.
In addition, Minister Kamara said that the Government of Liberia is currently engaged in a midterm review of its Agenda for Transformation , with the objective of aligning and synergizing the national Vision 2030 , the Africa Union’s Agenda 2063 as well as the global 2030 Development Agenda .
Minister Kamara continued : “We believe that the consolidation of development priorities and building consensus at all levels , will contribute to acceleration of the domestication process . These processes are anchored in Government’s decentralization program aimed at enhancing local governance and engender local ownership of national development”

Minister Kamara however, stressed the importance of creating an enabling environment for the ultimate success of the SDGs. On this , she said the current global economic downturn is negatively impacting economies . Specifically , she said that Liberia was affected by the drastic reduction in prices of its principal export commodities , iron ore and rubber which impeded the post -Ebola recovery and stabilization plan.

Concluding, Minister Kamara pointed out that the challenges facing the global community underscore the imperative of strategic partnership at all levels. As such , Liberia has begun to forge partnership with agencies of the UN system , regional bodies financial as well as bilateral entities and that, such partnership has been encouraging . She urged for the reinforcement of outreach to the private sectors, while capitalizing effectively on the commitment and financing possibility offered in the Addis Ababa Action Agenda.

For his part, the President of the 70th session of the UN General Assembly, H.E. Mr. Mogens Lykketoft has called on the International Community to work in close collaboration to achieve SDG goals. This, he said was necessary to end hunger, disease and inequality throughout the globe.
The SDGs was adopted by the UN Septembers 2015, to address challenges/gaps left over by the Millennium Development Goals (MDGs)