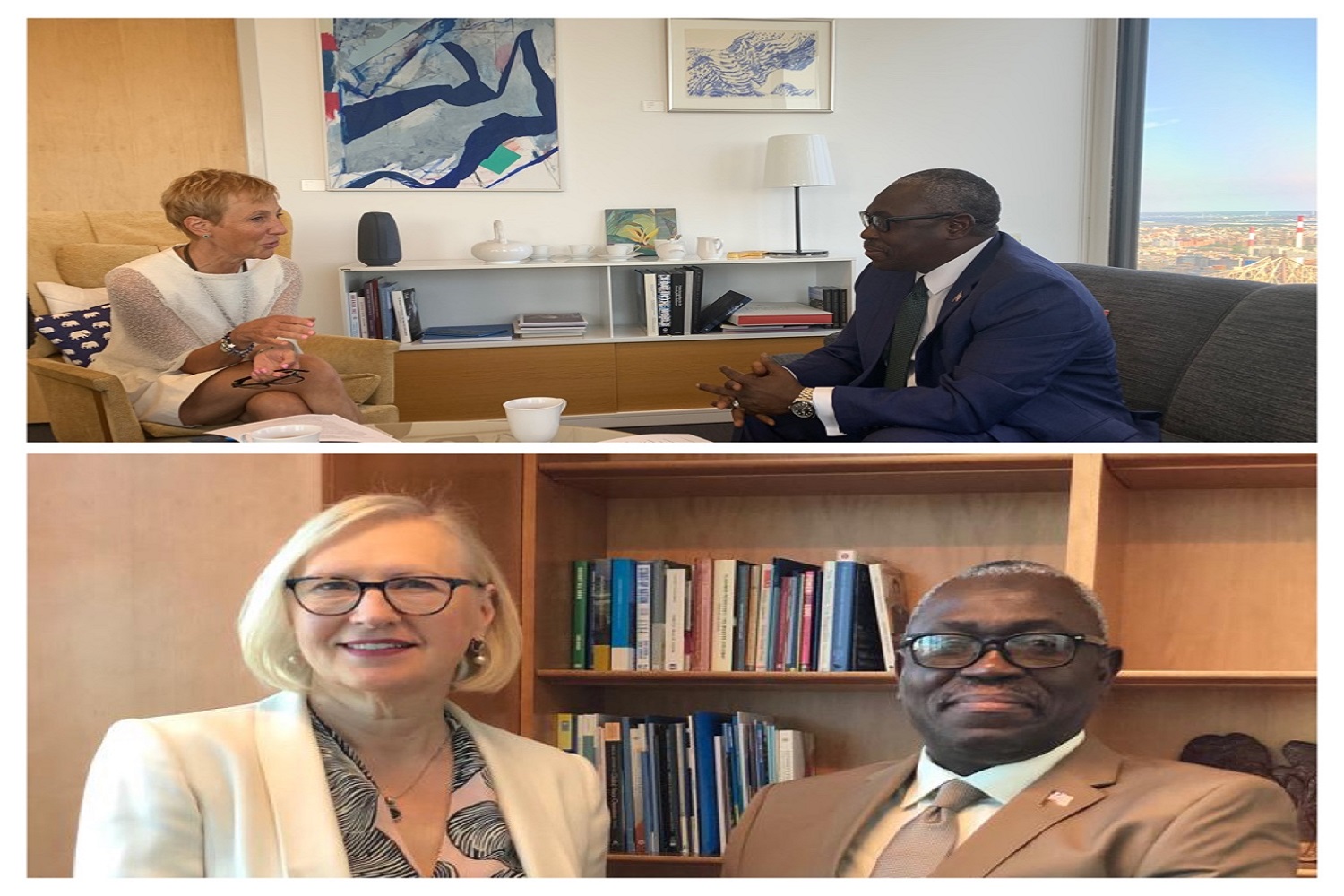 The United Nations, through its Peacebuilding Support Office and the Liberia Configuration of the Peacebuilding Commission, has renewed its commitment to support Liberia’s peacebuilding priorities, especially the 2023 Legislative and Presidential Elections.

The commitment was renewed when Liberia’s Minister of Internal Affairs, Hon. Varney A. Sirleaf held separate engagements in New York with the Chair of the Liberia Configuration of the Peacebuilding Commission and the Permanent Representative of Sweden to the United Nations, Ambassador Anna Karin Eneström, and Assistant Secretary General for Peacebuilding Support, Ms. Elizabeth Spehar. The engagements were held on August 30 and September 1, 2022, respectively.

During the engagements, Minister Sirleaf stressed that full support by the United Nations and all partners to the 2023 Presidential and Legislative elections was critical for sustaining the peacebuilding gains made over the years in Liberia.

He assured that the Government of Liberia, under the leadership of His Excellency President George Manneh Weah, is committed to ensuring the enabling environment for the conduct of a peaceful, transparent, and inclusive election and has begun implementing, with support from partners, policies, and programs in this regard.

In 2021, the Peacebuilding Fund approved five new projects in Liberia, two of which are supporting women’s political empowerment and prevention of gender-based violence, women’s leadership at the county level, and women and youth driven community early warning systems.

Minister Sirleaf described the projects as positive and welcoming, especially the ones that promote women’s political empowerment, noting that “women can be good leaders and custodians of peace just as men or even more than men.”

The Internal Affairs Minister then appealed for more technical and institutional support to ensure the conduct of an inclusive and peaceful election in Liberia. “To this end I am seeking support of the United Nations and Bilateral Missions for institutions related to electioneering for inclusive, free and fair elections; support to the election situation room for monitoring and responding to issues before, during and after the elections; support to early warning and response mechanisms and support to county peace committees”.

Additionally, Minister Sirleaf sought technical and financial support toward addressing boundary disputes, decentralization challenges, particularly the implementation of the Local Government Act of 2018, the recently legislated Revenue Sharing Law, Cross-border peace, and issues of youth and women’s empowerment, describing them as issues with potential to derail the peace in Liberia.

Ms. Spehar also assured that the Peacebuilding Support Office and the Peacebuilding Commission will continue to support the conduct of peaceful and inclusive elections in Liberia, which she described as a necessity for the consolidation of democracy and peace in Liberia.

Said Spehar: “Not only is the upcoming election a priority for the Government, but a necessity for the country…we don’t want backsliding, we don’t want deterioration of the situation; we want to keep going forward. We all know how peace can be fragile, it’s not a linear process, you can have two steps forward and sometimes one to two steps backward, so we want to help Liberia consolidate the democracy and the peace that you are building.

The PBSO boss confirmed the mobilization of resources to provide support to some crucial peacebuilding areas, including bolstering youth and women empowerment and participation in elections, and countering hate speech and other types of incitements that could lead to electoral violence. She expressed the hope that the support will be useful contributions.

For her part, Ambassador Anna Karin Eneström, Chair of the Liberia Configuration of the Peacebuilding Commission and the Permanent Representative of Sweden, acknowledged the peacebuilding challenges mentioned by the Minister and assured of the UN’s commitment of support. She emphasized that the pending election was an opportunity for Liberia to consolidate the democratic gains achieved over the years.

Ambassador Eneström disclosed that plans are underway for the conduct of a PBC Liberian Configuration meeting in October, exclusively on the 2023 elections.

She extended an invitation to the Minister of Internal Affairs to attend the meeting to further make the case and broaden the request for support to countries and institutions within and outside the UN Peacebuilding Commission. “We at the peacebuilding Commission have a focus on the upcoming elections and we are planning a meeting in October this year, exclusively on the 2023 elections in Liberia and we hope that you will attend. … Then, of course, all the issues of the Situation Room and Early Warning Structures can be brought to the table and discussed”.  Ambassador Eneström told the Minister.

The engagements by Minister Sirleaf followed a recent official Peacebuilding Commission visit    to Liberia by Ambassador Eneström and ASG Spehar and are a part of Minister Sirleaf’s efforts to rally more support for Liberia’s peacebuilding roadmap, including soliciting funding from UN and other bilateral partners towards a free, fair, transparent, and tension-free 2023 Elections, as envisaged by His Excellency Dr. George Manneh Weah, President of the Republic of Liberia.

Minister Sirleaf was accompanied to the meetings by Ms. Cecilia Forgbe Wreh McGill, Deputy Permanent Representative of Liberia to the United Nations, and Mr. Emmanuel Wheinyue, Technical Focal Person in the Officer of the Minister of Internal Affairs.