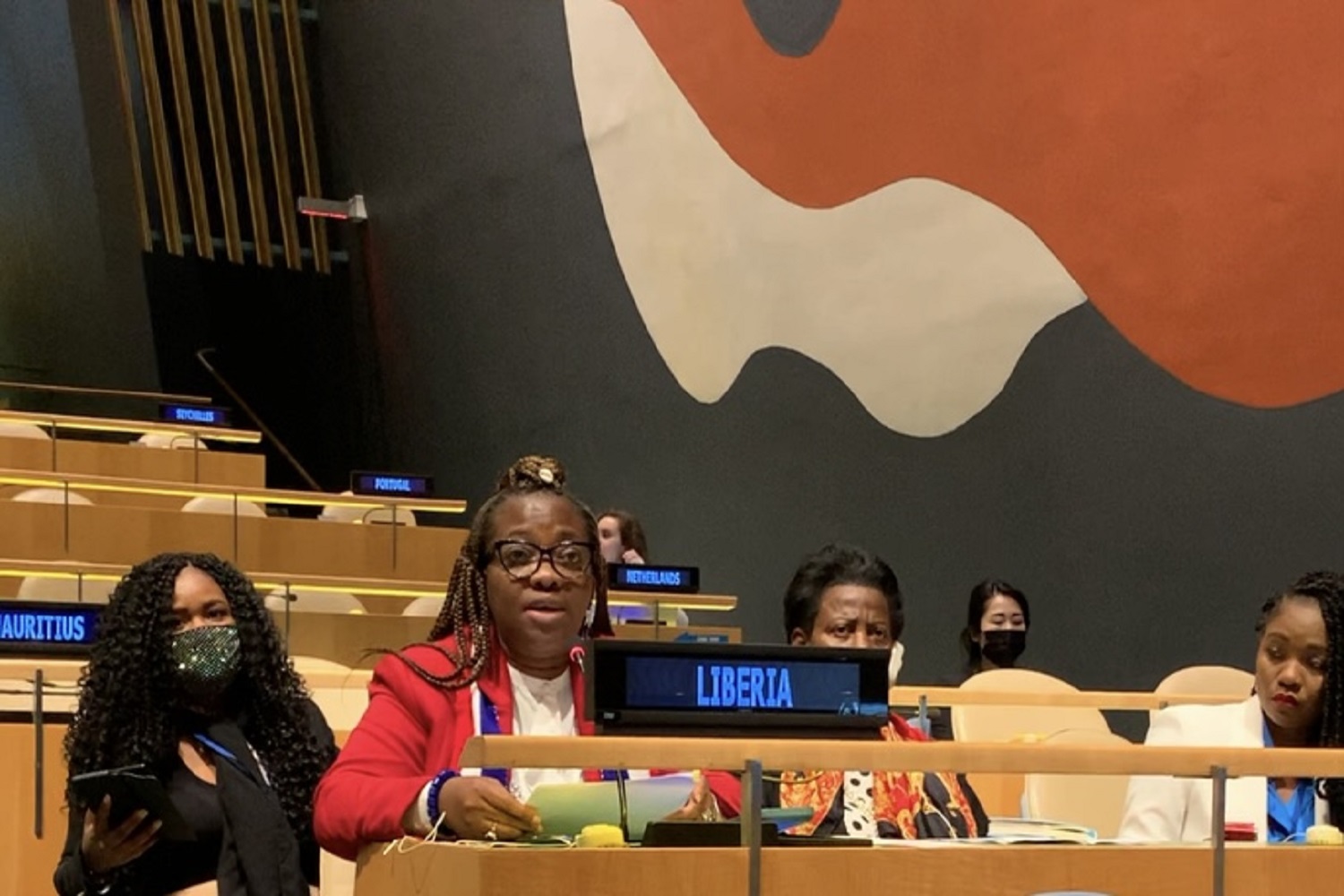 On Tuesday March 22, 2022, Liberia’s Minister of Gender, Children and Social Protection, Hon. Williametta E. Saydee Tarr addressed the General Discussions of the 66th Session of the Commission on the Status of Women (CSW66).

Kindly allow me to congratulate you, madam chair and members of the Bureau on your election.

My delegation is pleased to participate in the Sixty-Sixth Session of the Commission on the Status of Women, and brings greetings from our Feminist-in-Chief, H.E. Dr. George Manneh Weah, President of the Republic of Liberia, and a passionate HeForShe champion.

Liberia aligns itself with the statement delivered by Lesotho on behalf of the African Group and wishes to emphasize the following in its national capacity:

My delegation welcomes the report of the Secretary General on the priority theme: “Achieving gender equality and the empowerment of all women and girls in the context of climate change, environmental and disaster risk reduction policies and programmes”.

We acknowledge that gender inequality coupled with climate and environment crises is the greatest sustainable development challenge of the present time, and there is a need for urgent action through related climate change, environmental and disaster risk reduction policies and programs. As part of the West African region, Liberia is naturally and diversely endowed in terms of resources.  About 58% of the country’s population depends on agriculture for their livelihood. We have been working with farmers, particularly female farmers in building their capacity as it regards climate smart agriculture, and providing them technical support.

The Paris Agreement under the United Nations Framework Convention on Climate Change recognized the impacts of climate change on gender equality and women’s empowerment for sustainable development.  Liberia, as one of the signing members of the Convention reaffirmed its commitment in the fight against Climate Change through its revised Nationally Determined Contributions (NDC) with the ambition to reduce emission by 15% below business-as-usual levels by 2030 with a long-term goal of carbon neutrality by 2050, conditional upon international support.

As ambitious as Liberia's NDC is, it considered gender inclusiveness for an effective and efficient implementation and ensured inclusiveness in environmental planning and decision-making, through capacity building for women - which we believe shall enable the integration and mainstreaming of economic activities, decision-making on environmental and climate change discussions, given that climate change affects women greatly.

It is against this backdrop, that the Government of Liberia has in place a National Policy and Response Strategy on Climate Change. My Ministry has been working closely with relevant actors to fully implement the Land Rights Act, to provide women’s rights and access/or ownership to farm land and to benefit from concessions in their areas considering the environmental and disaster risks which has the potential to directly affect women, girls and children.

Madam Chair, our planting of trees is in line with Liberia’s Nationally Determined Contributions (NDC) of the Paris Agreement.  In demonstration of our commitment, Liberia has already submitted its forest reference emissions level to the Secretariat of the United Nations Framework Convention on Climate Change and aims to, among other things, achieve its Vision 2030 through a low-carbon, climate-resilient development pathway through the implementation and periodic updating of key national and climate change policies and action plans to achieve its targets.

All these can only be achieved through the support of indigenous women across the forested landscape of Liberia.

Madam Chair, as a signatory to the Sendai Framework for Disaster Risk Reduction, Liberia has initiated efforts aimed at aligning all of its Disaster Risk Reduction (DRR) related activities and programs with the Sendai Framework for Action. The Government through its National Disaster Management Agency responds to disasters, most times mainly affecting women, girls and children. To ensure prevention in this context, my government through the Hydro-Meteorological Services has been generating early warning information on hydro-meteorological hazards including flood and windstorm.

Madam Chair, we have developed for the first time, Liberia’s Gender Equality Profile (GEP). This is to ensure we can provide an in-depth analysis that will enhance the understanding of the differences in the conditions, needs, participation rates, access to resources and property rights, development planning and control of assets, decision-making powers between girls, women, boys and men in their assigned gender roles, Our GEP will provide strategic investment direction on ways our country can empower our people.  Having been concerned about a more holistic approach to prevent and respond to Sexual and Gender Based Violence (SGBV), our President established a Special Presidential Anti-SGBV Taskforce to fight this scourge.  To date we have procured 4 DNA machines that are being operationalized, to aid in evidence gathering of related sexual and gender-based violence cases; this will bring relief and justice to both survivors and alleged perpetrators during the legal proceedings of SGBV cases, especially to tie the crime to the perpetrators at the level of the court. Our Traditional and religious leaders have also beefed up their own efforts in supporting prevention efforts by banning Female Genital Mutilation (FGM) last month, for 3 years, whilst continuing to work toward eradicating this HTP and uphold all basic human rights for all.

Madam Chair, as part of our national strategy, Liberia is now moving to:

Madam Chair, finally, as we strive to achieve gender equality and empower women and girls, we encourage member states to assess and purposefully address the challenges women and girls face. We remain engaged in soliciting the needed support for technical and policy reforms to address these emerging challenges within the context of the implementation of the Beijing Declaration and Platform for Action, and the gender-responsive implementation of the 2030 Agenda for Sustainable Development.

Thanks for your attention.