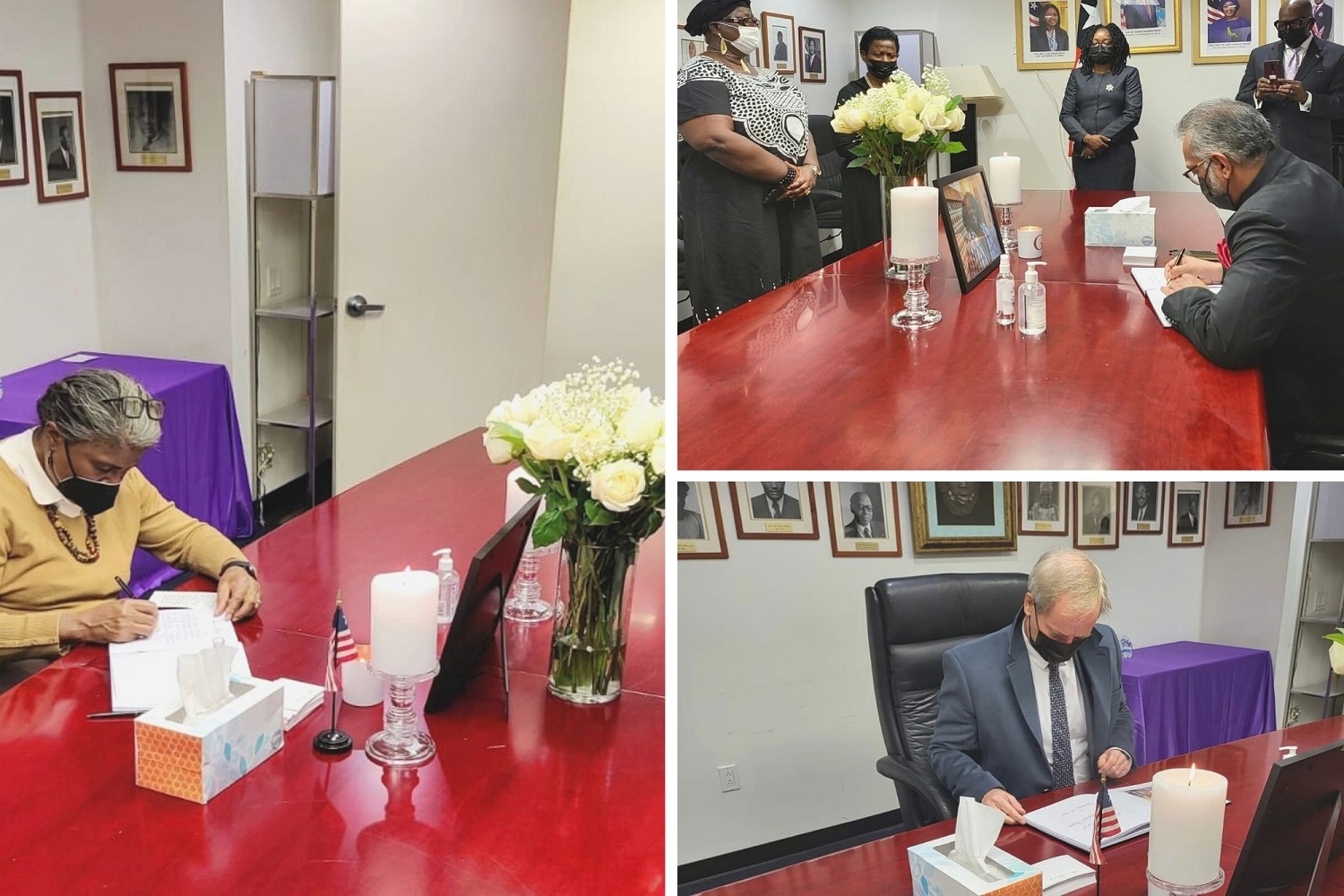 The Permanent Mission of the Republic of Liberia to the United Nations on Wednesday, January 26, 2022, opened a hybrid book of condolence for Minister Counselor, Ms. Gail Greezakwah Farngalo. Ms. Farngalo died on Tuesday, January 18, 2022, in New York.

Members of the Diplomatic community within and out of New York, including Ambassadors and Permanent Representatives, colleagues, and friends, paid tributes in person and virtually, sharing fond memories of Ms. Farngalo’s professionalism and excellent human relations.

On behalf of the President of the 76th Session of the United Nations General Assembly, Chef de Cabinet, Ambassador Nagaraj Kakanur, described Ms. Farngalo as a diplomat who touched the lives of so many. “Gail was a diplomat who went beyond borders. She was a friend of one and all. Her work in the areas of human rights, gender equality, and empowerment of women is well recognized in the United Nations System. The outpouring of condolences from member states, civil society, and personally from the Secretary-General speak to the impact she has created. People like Gail are born once in a lifetime” He wrote.

For Her Excellency Linda Thomas Greenfield, Permanent Representative of the United States to the United Nations, “Ms. Farngalo was a fierce advocate for women and girls and a defender for human rights who challenged us all to live up to the ideals of the UN Charter”.

Ms. McGill joined colleagues at the Permanent Mission in recalling that Ms. Farngalo was a consummate professional, a trailblazer, and true patriot who was always concerned about Liberia’s representation at the United Nations, even when she served in the office of the President of the General Assembly.

Ms. McGill furthered that “Gail was always in a good mood, positive and very professional each time I met her at the General Assembly. She was a valued asset not only to Liberia but the United Nations, as well”.

Ms. Farngalo served the Liberian Foreign Service for ten (10) years before being granted a sabbatical to serve in the Office of the President of the General Assembly (OPGA).

During her tenure at the Permanent Mission of Liberia to the United Nations, Ms. Farngalo covered the Third Committee (Social Humanitarian and Cultural Affairs),  and served as Election Officer and Liaison for Military, Police, and Corrections Affairs--supporting Liberia’s peacekeeping efforts in UN Peacekeeping Missions.

Ms. Farngalo also served as focal point and coordinator for the Mission’s engagements during the Ebola epidemic, participating in the United Nations preliminary response coordination meetings as well as meetings of the Ebola Multi-partner Trust Fund and successive meetings of Secretary-General Ban Ki-Moon’s Panel on Health Systems Strengthening in the wake of the Ebola Health Crisis.

Under the umbrella of the African Group of Countries at the United Nations, Ms. Farngalo served as  Vice-Chair of the Bureau of the Third Committee for the 74th session of the General Assembly and was charged with the facilitation of the annual Chair’s resolution on the Follow up to the Fourth World Conference on Women and the Full Implementation of the Beijing Declaration and Platform for Action.  She also facilitated the Group’s sponsored resolutions on Malaria and on Refugees and Displaced Persons in Africa in the Third Committee. Ms. Farngalo also represented Africa as Vice President of the Executive Board of UN Women and a member of the Executive Board of the United Nations Children’s Fund (UNICEF).

At the Office of the President of the General Assembly, Ms. Farngalo served as Senior Adviser and Lead on Gender Equality and Women’s Empowerment and Focal Point for UN Women and the Commission on the Status of Women (CSW) (75th UNGA) and Team Leader for Human Rights (76th UNGA).