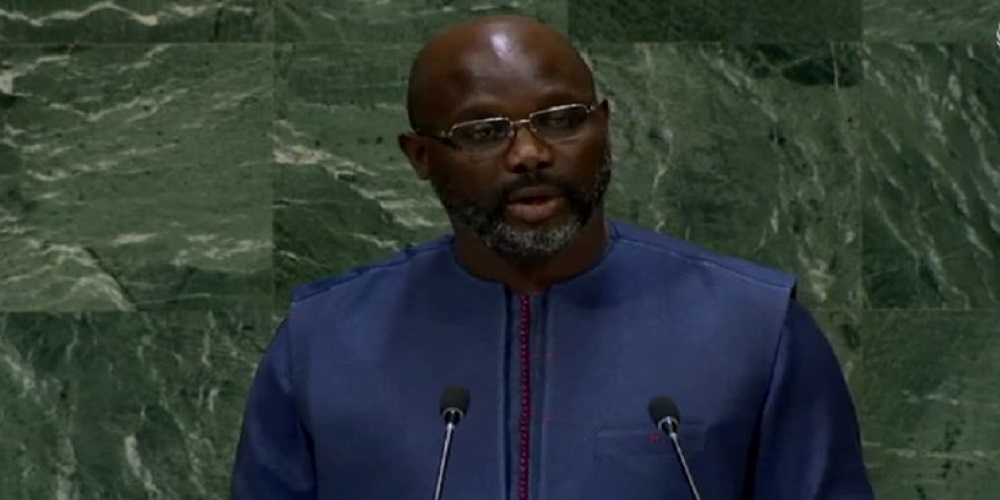 The President of the Republic, Dr. George Manneh Weah, has stressed the urgency for collective action by world powers to review, refocus, and re-adjust the priorities of the United Nations so that it can become more relevant and more effective in meeting the challenges that are today presented by new global alliances and realities.

The Liberian Leader noted that the world has changed considerably since the United Nations came into existence after World War II, and the configuration of powers which obtained when its Charter was first written and upon which its decision-making structures were based, has witnessed many significant transformations over these past Seventy-Five years.

“In this regard, more attention has to be paid to inclusiveness of the most vulnerable in our societies, whose special needs require a new and different mindset,” President Weah said in a visual statement on Wednesday, September 23, 2020, as he addressed the world body’s High-Level meeting in commemoration of its 75th Anniversary.

He said Liberia believes that the maintenance of world peace and security is of paramount importance for global growth and development.

“Every nation without peace is fragile, and has an uncertain future,” the Liberian Leader said. “Therefore, as we chart a new course for shared prosperity, we must reaffirm our collective commitment to multilateralism. As we confront these new challenges, multilateralism, international cooperation, and global solidarity will become increasingly important in addressing the complex problems that we now have to solve.”

Dr. Weah recalled that as part of the process of re-evaluation, the United Nations adopted in 2015 a set of seventeen (17) Global Goals to be met by 2030.

“These Sustainable Development Goals (SDGs) are intended to serve as a roadmap for our collective efforts to bring peace and prosperity to all mankind,” he noted, adding: “We are already five years into the 15-year Agenda, and with only 10 years left, it is already clear that we will have to re-double our efforts and accelerate our actions in many areas if we are to attain any or all of these lofty goals by the end of this decade.”

The UN General Assembly theme this year, “The Future We Want, the UN We Need: Reaffirming our Collective Commitment to Multilateralism - Confronting Covid-19 through Effective Multilateral Action”—President Weah stressed that such a theme could not be more appropriate, as the UN celebrates its founding amidst the ravishes of a global pandemic that has infected nearly 30 million citizens of most of its member states, and killed almost one million persons globally in just over six (6) months.

He used the forum to disclosed that Liberia was able to build on “our previous experience six (6) years ago with the Ebola Viral Epidemic, and I am proud to say that the Government and its development partners have mounted a robust National COVID Response that seems to have contained COVID-19 for the time being.”

The President further reported to the world body that “as a result, only about 1,320 Liberians have been affected by COVID-19 to date, of which approximately 1,213 of these have fully recovered, with some 82 Liberians falling to the pandemic.

He extended special thanks to Liberia’s bilateral and multilateral partners for the strong support received to deal with the COVID-19 emergency and help sustain the Liberian economy.

“The Government has now developed a Post-COVID Economic Recovery Plan that prioritizes short term actions and investments in key sectors such as agriculture and tourism, as a means of reducing the impact of COVID-19 but also providing the basis for economic recovery,” the Chief Executive asserted, acknowledging that the virus has exposed shortcomings, vulnerabilities of world order.

President Weah extended his deepest sympathy and condolences to the bereaved families of all those who lost their lives to this deadly disease.

He also used the occasion to report on many measures taken by his Government since the 74th General Assembly to deal with the persistent socio-economic problems that continue to beset Liberia.

For example, the President said, the closure of schools to contain the COVID pandemic had seen an unprecedented recent increase in rape and sexual gender-based violence perpetrated upon young women and girls who have had to stay at home but that his government had taken a couple of measures.

“In response to this epidemic within the pandemic, we recently convened a National Conference which involved all Sexual Gender-Based Violence stakeholders”, President Weah said. “This resulted in the validation of a comprehensive roadmap intended to mitigate the incidence of this menace in our society. Based on the recommendations that emanated from the roadmap, my Government has declared rape as a National Emergency, appointed a Special Prosecutor for rape, set up a Sex Offenders Registry, and established a National Security Task Force on Sexual and Gender-Based Violence.”

On the issue of ending Female Genital Mutilation, he said, “for the first time in our country, traditional leaders have agreed to take ownership for ending this harmful practice. This has resulted into a first-of-its-kind suspension of the activities of all traditional bush schools in Liberia, where this harmful practice is carried out. In addition, we recently passed into law the Domestic Violence Act; a legal instrument that seeks to abolish all forms of violence meted out against women, children and men.”

On the issue of corruption, the Liberian Leader reported that in order to call attention to the persistence and prevalence of corruption in our society, a National Anti-Corruption Conference was recently held, which was attended by all stakeholders, in an attempt to find practical and lasting solutions to this age-old problem.