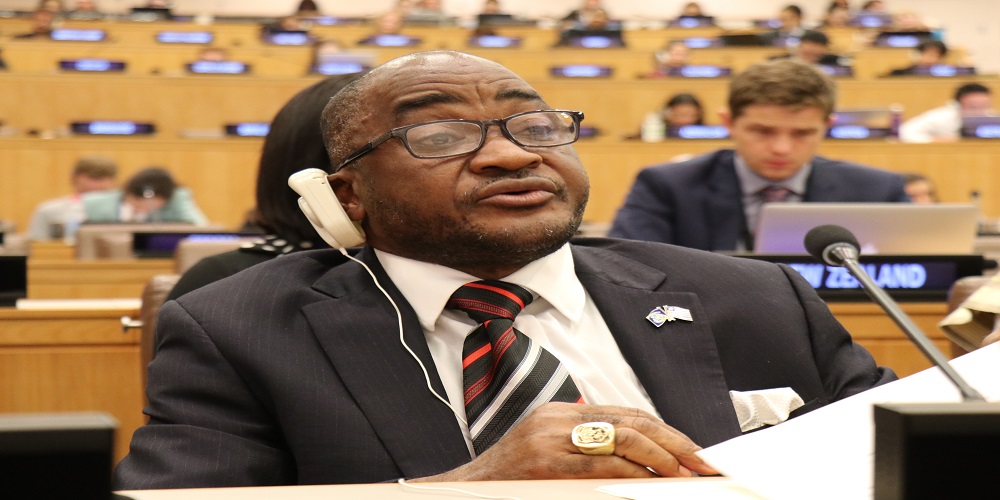 Liberia's Ambassador Extraordinary and Plenipotentiary and Permanent Representative to the United Nations, His Excellency Dee-Maxwell Saah Kemayah, Sr. has called for continuous technical and expert support to strengthen and deepen the global framework for gender equality and empowerment of all women and girls.

Addressing the United Nations Committee on Social, Humanitarian and Cultural Affairs during its consideration of its Agenda Item 26--Advancement of Women, Ambassador Kemayah said strengthened gender strategies and policies will not only empower women but, enhance the achievement of the Sustainable Development Goals (SDGs).

Ambassador Kemayah, on behalf of the Government of Liberia, highlighted the need for UN Women to increase the embedment of technical experts to work closely with national governments and ministries to develop capacities on gender mainstreaming interventions at the program and technical levels. He also encouraged UN Women to continue joint efforts with other UN Agencies--UNDP, UNICEF, and UNFPA on program implementation; noting that joint programs can be more effective and efficient in concretizing national platforms on gender issues.

According to a dispatch from the Permanent Mission of the Republic of Liberia to the United Nations, the Liberian Envoy used the meeting to emphasize the need to continue gender-responsive budgeting and planning, as budget allocation is key to sustaining efforts at the national level.

In Liberia, Ambassador Kemayah shared that Gender Equality and Women empowerment are  among key priorities of the Government's National Development Plan--the Pro-Poor Agenda for Prosperity and Development (PAPD); "pioneered by His Excellency, Dr. George Manneh Weah, President of the Republic of Liberia, and Liberia's Feminist-In-Chief".

Ambassador Kemayah  emphasized that Liberia has remained steadfast in creating the enabling and inclusive environment for women and girls to thrive, in spite of daunting challenges, and outlined several initiatives taken to address gender equality and women empowerment; including enactment of laws; and review of necessary policies.

Said Ambassador Kemayah: "Liberia embarked on the following initiatives: the review of the National Gender Policy (NGP) which aims to promote gender equality, social economic development; and enhance women and girls empowerment for sustainable; and inclusive development; the availability of the second phase of our National Action Plan (NAP) on the implementation of United Nations Security Council Resolution (UNSCR) 1325 on Women, Peace and Security; to enhance the active and direct participation of women and girls in conflict prevention, peacebuilding and leadership; the recent passage of the Domestic Violence Law to help combat violence against women and girls; and other vulnerable groups. This law is an added boost to the “Spotlight Initiative”, funded by the European Union to help fight violence against women and girls; and other vulnerable groups."

Ambassador Kemayah thanked United Nations Secretary-General His Excellency Mr. Antonio Guterres for his commendable role in achieving gender parity and gender mainstreaming within the United Nations System and assured that the Government of Liberia under the Leadership of His Excellency President Weah is on a steady path to ensuring women participation; especially in the security sector. "Liberia has experienced steady progress in the participation of women in the security sector. The Armed Forces of Liberia (AFL); in particular, is exerting all efforts to increase its recruitment of females by the year 2022; with the aim to deploy them in peacekeeping missions; while in the process; fulfilling the United Nations Peace Operations gender parity requirement of twenty percent." Ambassador Kemayah emphasized.

Ambassador Kemayah disclosed that as part of a proposed constitutional review process, His Excellency President Weah is currently championing the provision of additional seats in the Legislature for women, persons with disability, and youth.

Stressing that Gender equality cannot be sustained unless it is inclusive and brings all women into the fold, Ambassador Kemayah explained that the Government of Liberia in a bid to  mitigate the disadvantage rural women face, has instituted a yearly program, the National Rural Women Conference to bring women from various sectors together to discuss issues of women, and work towards the political participation and decision making of rural women.

At the same time, Ambassador Kemayah asserted that in recognition of the profound impact of climate change on rural women, and the importance of their contribution in mitigation, Liberia's "National Disaster Policy, the Environmental Protection Agency (EPA) Act; and the National Disaster Management Act, consequentially, ensure that all activities implemented by the Government and development partners before, during and after disasters, proactively and consciously include the participation of women and other vulnerable groups".

Ambassador Kemayah then expressed the hope that the commemoration of Two (2) key milestones in 2020-- the Twenty-fifth (25TH) anniversary of the Beijing Declaration and Platform for Action (BDPA) and the Twentieth (20th) anniversary of the United Nations Security Council Resolution (UNSCR) 1325 will propel United Nations Member States to take inventory of their  achievements, gaps and challenges and to recommit to ensuring gender equality and the empowerment of all women and girls.