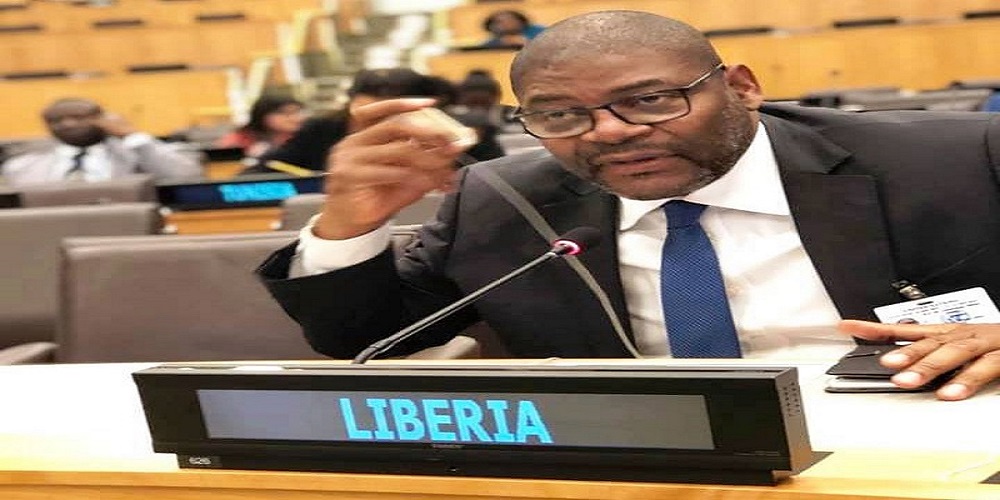 The Minister of Foreign Affairs of the Republic of Liberia, His Excellency Gbehzohngar Milton Findley says there is an increasing need for enthusiastic South-South and Triangular Cooperation to address the problem of food insecurity in Africa.

South-South Cooperation involves the exchange of resources, technology, and knowledge between developing countries, also known as countries of the Global South; while Triangular Cooperation is collaboration in which traditional donor countries and multilateral organizations facilitate South-South initiatives through the provision of funding, training, management, and technological systems, as well as other forms of support.

Providing a testimonial at a 'High Level Panel on Food Security and the Achievement of the SDGs in Africa: The Role of South-South and Triangular Cooperation' on the margins of the Seventy-fourth Session of the United Nations General Assembly (74th UNGA), Minister Findley said South-South and Triangular Cooperation have proven to be innovative means to address challenges faced by developing countries at the national, regional and global levels; especially in reducing inequality, eradicating poverty, reinforcing climate change action, providing health needs, and striving to create secure and cohesive societies.

According to a dispatch from the Permanent Mission of the Republic of Liberia to the United Nations, Minister Findley cited as a success story of South-South and Triangular cooperation, the response to the Ebola pandemic in the West African region; when developing countries provided assistance to Liberia and other sisterly countries to help quell the situation.

Minister Findley believes success can be achieved in food security if a similar South-South cooperation approach to Ebola is employed in the Agricultural Sector. "If we can apply the same kind of enthusiasm that was used in 2014 during the Ebola crisis-- sharing the experiences, technology, and the manner in which we solve problems; I believe we will be able to feed our people and sustain the climatic conditions needed for food production." Minister Findley stressed.

The Minister of Foreign Affairs of Liberia then disclosed that the Republic of Liberia is making efforts to intensify trade and cooperation regionally and internationally, in spite of challenges.

Minister Findley asserted that the Government of Liberia has identified Agriculture as the most potential, sustainable, and renewable source of income for the country, and a primary entry point in Liberia's National Development Plan-the Pro-poor Agenda for Prosperity and Development of Liberia (PAPD). "Many rural Liberians depend on agriculture for their livelihood. Once we can expand trade in such powerful sector, we will gradually, but successful respond to the challenges that confront us – including food insecurity, poverty, inequality, etc." Minister Findley emphasized.

On South-South and Triangular Cooperation in the Agricultural Sector, Minister Findley spoke of support received from the Food and Agriculture Organization (FAO) under the Technical Cooperation Program project aimed at strengthening national food control system in Liberia to ensure food safety and improve trade; and an offer from the Government of Morocco to assist Liberia's agriculture sector with transfer of knowledge through assimilation of cattle breeding.

Minister Findley also informed the High-Level meeting, that with the support of partners including the United States Agency for International Development/Liberia Agribusiness Development Activity (USAID/LADA), the African Development Bank and the World Bank,  the Government of Liberia has committed nearly Two Million US dollars for the development of lowland and support to smallholder farmers to support production and value addition.

Minister Findley used the meeting to stress the need for information sharing and coordination on the Sustainable Development Goals (SDGs); noting that South-South and Triangular Cooperation will play a very crucial role in the realization of the SDGs, particularly based innovative forms of knowledge exchange, and transfer of technology, as well as utilizing and expanding multi-stakeholder partnerships.

He encouraged all stakeholders to renew their commitment to strengthen their resolve on advancing the approach of South-South and Triangular Cooperation to ensure that the world benefits from sustainable development and a prosperous and safe environment for all.

The High-Level Panel on Food Security and the Achievement of the Sustainable Development Goals (SDGs) in Africa: The Role of South-South and Triangular Cooperation was organized by the Permanent Mission of Morocco to the United Nations in collaboration with the Food and Agriculture Organization, the United Nations Economic Commission on Africa, and the African Development Bank.