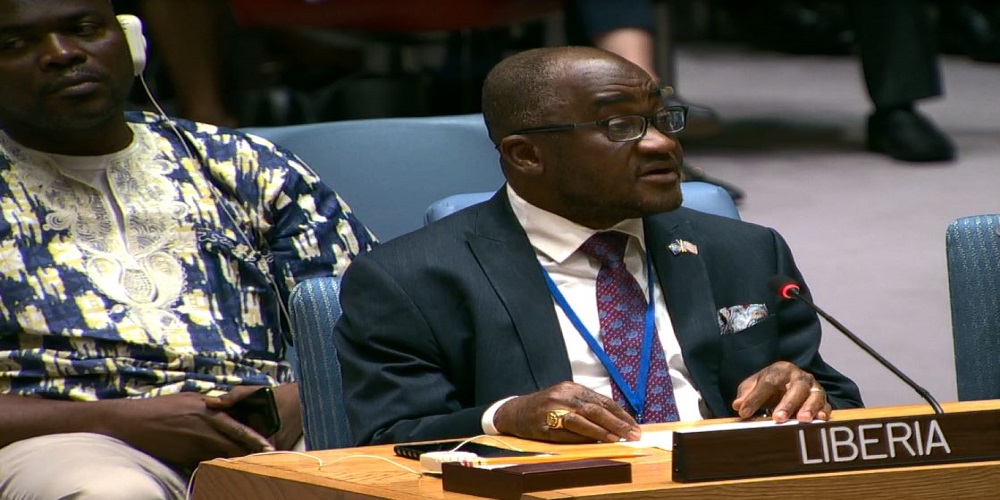 Liberia's Ambassador Extraordinary and Plenipotentiary, and Permanent Representative to the United Nations, His Excellency Dee-Maxwell Saah Kemayah, Sr., says there is a dire need to address the funding gaps for the rehabilitation and reintegration of children affected by armed conflicts globally.

Ambassador Kemayah described as regrettable, the record rise in the abduction; killing and maiming of children globally; as well as attacks on schools; hospitals; and the denial of humanitarian access to children. " The uncomfortable truth remains- that; the scale and severity of the violations being committed against children continue to be unabated in several regions of the world; with wanton disregard for international law; as well as international norms; with the future of millions of children living in countries affected by armed conflict; remaining at risk. This situation deserves utmost reflection." He emphasized.

A dispatch from the Permanent Mission of the Republic of Liberia to the United Nations quotes Ambassador Kemayah as urging that priority be placed on addressing the root causes of conflict to ensure prevention.

Noting the tenth (10th) anniversary of Security Council Resolution 1882 on Children and Armed Conflict (2009); Ambassador Kemayah called on the Council to reinforce its provision that all parties to armed conflicts must adhere to the obligations applicable to them under international law.

Ambassador Kemayah used the debate to highlight that the Republic of Liberia, having transitioned from conflict to peace, and considering its huge youthful population has developed through its National Flagship Development Plan-The Pro-Poor Agenda for Prosperity and Development (PAPD); programs to strengthen child and social protection.

Said Ambassador Kemayah: "Within the ambit of our National Flagship Development Plan-The Pro-Poor Agenda for Prosperity and Development (PAPD); the Government of Liberia under the astute Leadership of His Excellency Dr. George Manneh Weah; espouses the promotion of democracy; good governance; respect for human rights; justice and the Rule of law. Hence; having transitioned from conflict to peace, and considering that the youth which constitutes 63% of our population are the building blocks for the sustainability of Peace, Security, Democracy and Development in our country; the Government of Liberia;  has at the core of its Pro-Poor Agenda for Prosperity and Development (PAPD); programs to strengthen child and social protection. "

Ambassador Kemayah further stated that the programs are also complemented by other child-related initiatives in Liberia; including, but not limited to the enactment of the “Children’s Law”; and the establishment of the  Women and Children Protection Section at the Liberia National Police (LNP).

The Liberian Ambassador to the United Nations then commended the hard work of the Special Representative of the United Nations Secretary-General for Children and Armed Conflict, Ms. Virginia Gamba; and particularly lauded the new initiative launched in April of this year under the campaign: “ACT to Protect Children Affected by Armed Conflict”. "This initiative seeks to generate greater awareness and action to improve the protection of children affected by armed conflict;" Ambassador Kemayah stressed.