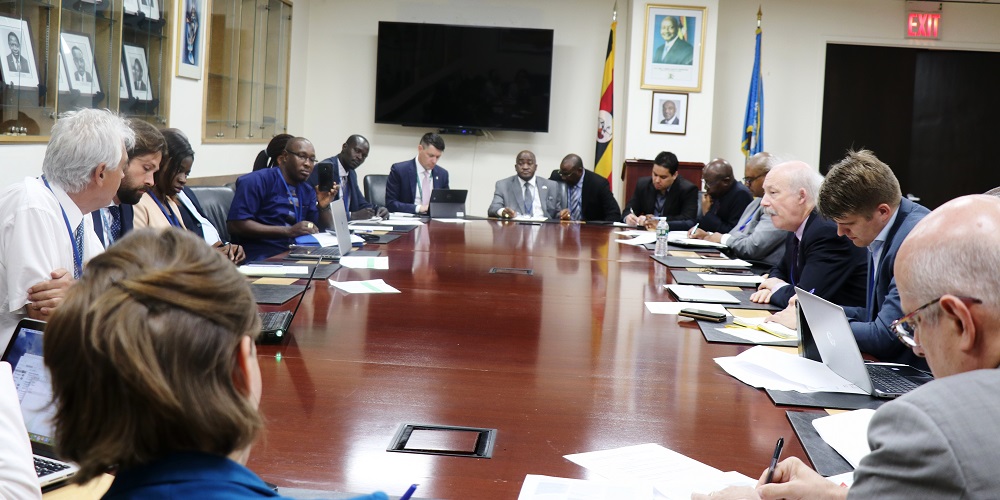 The proposed resolution will complement a 2015 UNESCO resolution, proclaiming September 28 as International Day for Universal Access to Information.

On Tuesday June 16, 2019, the Permanent Mission of the Republic of Liberia to the United Nations in collaboration with partners-- United Nations Educational, Scientific and Cultural Organization (UNESCO), the United Nations Development Program (UNDP), International Institute for Electoral Assistance (International IDEA), and the African Platform on Access to Information (APAI), convened a Coordination Meeting with United Nations Member States to build support for the proposed resolution.

Chairing the Coordination meeting, His Excellency Dee-Maxwell Saah Kemayah, Sr., Ambassador Extraordinary and  Plenipotentiary and Permanent Representative of Liberia to the United Nations said setting aside of such commemorative day was necessary as "access to information is not only essential for the democratic functioning of a society, but also pivotal and vital for the sustainable development of countries".

Ambassador Kemayah stressed that access to information was an enabler of all the Seventeen (17) Sustainable Development Goals (SDGs); facilitating both implementation and the measurement of progress.

Said Ambassador Kemayah: "Consistent with the new United Nations development framework; namely, the Sustainable Development Goals (SDGs), which under Goal 16.10.2 recognizes access to information, we appreciate the importance of access to information as an enabler of all other sustainable development goals; whether it is ending poverty in all its forms everywhere; ending hunger and achieving food security and food nutrition; ensuring healthy lives and well-being; ensuring equitable education, gender equality and women empowerment; promoting peaceful and inclusive societies; building resilient infrastructure; or reducing inequalities within and among countries. None of these goals can be achieved without access to information. In addition to the fact that access to information is necessary for the realization of the Seventeen (17) Sustainable Development Goals (SDGs), it is also important to facilitate the measurement of progress being made towards the realization of these goals."

The Liberian Ambassador to the United Nations asserted that setting aside of September 28 as International Day for Universal Access to Information, will provide an opportunity to celebrate and raise awareness on the importance of the right to information, and create a platform for Governments, civil society, citizens and development partners to reflect on challenges and ways to promote the advancement of access to information as a tangible tool for development and the realization of the Sustainable Development Goals (SDGs).

Reflecting on Liberia's Leadership in the area of access to information, Ambassador Kemayah noted that Liberia has one (1) of the best Access to Information Laws globally; allowing both the media and individual citizens to demand information from any Public Authority or Private Authority that carries out Government related functions.

Also speaking at the meeting was Guy Berger, Director for Freedom of Expression and Media Development at UNESCO. He presented the background on how Member States at UNESCO came to adopt the day and signaled further that other parts of the United Nations family could possibly become involved if the United Nations General Assembly (UNGA) decided to recognize September 28.

Mr. Berger went on to affirm that “UNESCO is ready to continue expanding the number of places where the Day is observed with impact, such as this upcoming September 28;  where at least Twenty (20) countries will commemorate the occasion”. In addition, the UNESCO Director pointed to the value of the Day in promoting the monitoring of progress on Sustainable Development Goal (SDG) 16.10.2.

Director Berger, Mr. Massimo Tommasoli of  the Institute for Electoral Assistance (International IDEA), and Mr. Gilbert Sendugwa of the African Platform on Access to Information (APAI) commended the Republic of Liberia for its leadership in promoting Access to Information; and expressed appreciation to Ambassador Kemayah for leading the initiative, which they said will be a gift from Africa to the world when adopted.

Participants representing various United Member States, and other International Organizations;  including, but not limited to Cuba, Costa Rica, Ireland, Lesotho, and Sierra Leone, spoke favorably about the proposed resolution.