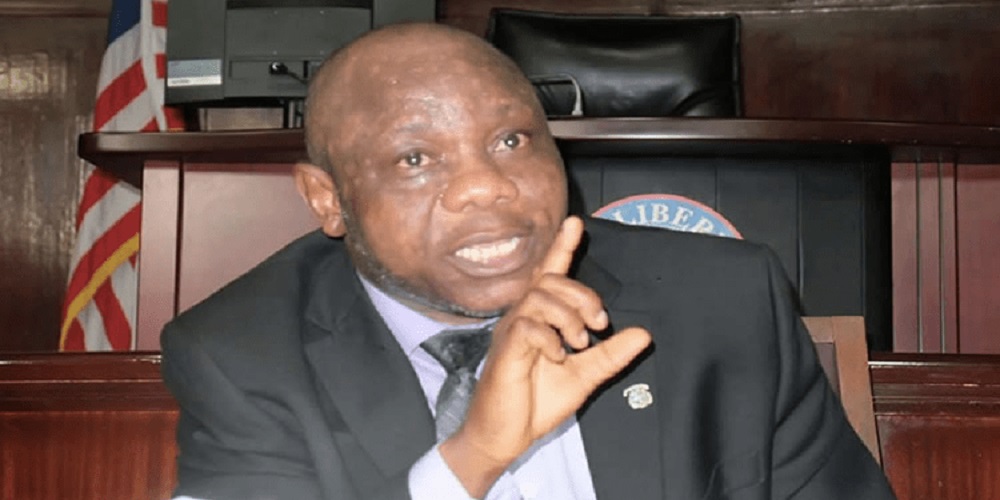 The Minister of Finance and Development Planning of the Republic of Liberia, Hon. Samuel D. Tweah, Jr., says the Government of Liberia will begin implementing new measures to help stabilize the economy of the Country and sustain the peace.

Providing updates on the general economic and social developments in Liberia to the United Nations Peacebuilding Commission, Minister Tweah disclosed that the “Cabinet has approved a battery of measures to stabilize on the microeconomic side, and was working with the International Monetary Fund (IMF) on a program to transform and restore confidence in the fiscal and monetary spaces”.

Minister Tweah who addressed the United Nations Peacebuilding Commission Meeting on Liberia via Video Teleconferencing (VTC) from Monrovia, said the measures will include the passage of a credible and realistic budget that reflects the Government’s true revenue potential; a strong wage reform--beginning with salary harmonization; and enforcement of a more effective cash management.

Minister Tweah told the Peacebuilding Commission that the Government has a very high wage bill--currently spending around 330 Million United States Dollars annually on salaries, leaving little resources to adequately invest in crucial sectors; hence, the need to ensure a salary harmonization exercise, a process that could not be achieved for the past nine (9) years.

In addition to the new measures, Minister Tweah further asserted that the Government will work towards widening the remittance stage to help stabilize the United States Dollars-Liberian Dollars exchange rate. Under the new measure, remittances sent to Liberia through MoneyGram, Western Union, and others, will be paid out in Liberian Dollars.

Minister Tweah was quick to point out that while these measures would lead to short and long term returns, it would not outrightly revive the economy without increased investments, and mentioned that the Government was working to create an enabling environment where investments could flow.

He noted that bad roads and high cost of electricity remain key challenges in reducing the cost of doing business, and disclosed that the Government is working with stakeholders to ensure that Liberia imports by April 2020, cheaper electricity from the Ivory Coast at a rate of 14 or 15 Cents per kilowatts hour.

On the implementation of the Pro-Poor Agenda for Prosperity and Development, Minister Tweah said His Excellency President George Manneh Weah’s road agenda is on course. He emphasized that community roads are being built across the Country through the Infrastructure Trust Fund; while the Government continues mobilization of financing for the construction of the Coastal Highway. Minister Tweah also spoke of great gains in education,  health, social protection, and youth employment, but said a lot more was needed to address the remaining challenges.

On the Political front, Minister Tweah said the Government’s vision is to sustain peace through equity and economic development for all Liberians, and urged the Peacebuilding Commission to focus on issues that drive conflict and instability, and have the potential to drive away investors. He stressed that the recent protest is evidence that issues of facts, dialogue, governance, and accountability need to be given more attention in Liberia.

His Excellency Dr. George Manneh Weah, and the Government and People of Liberia thank the Chair of the Liberia Peacebuilding Commission, H.E. Ambassador Olof Skoog for convening this meeting.

Also addressing the meeting via Video Teleconferencing (VTC) the Minister of Foreign Affairs His Excellency Mr. Gbehzongar Milton Findley, expressed immense gratitude to the United Nations and all our partners for their continued commitment and support to the sustenance of peace, democracy and development in Liberia.

Minister Findley asserted that the Government of Liberia is committed to the promotion of peace, security and the rule of law, as principal objectives of its foreign policy, evidenced by its handling of the June 7 protest in Liberia.

He assured the International Community that Liberia will remain actively engaged with the Peacebuilding Commission in its support to lasting peace and democracy in Liberia.

For his part, the Chair of the Liberia Configuration of the Peacebuilding Commission, His Excellency Ambassador Olof Skoog, Permanent Representative of Sweden to the United Nations said the Commission is encouraged by His Excellency President George Manneh Weah’s strong commitment to cooperate with the International Community to revive Liberia’s economy and sustain the peace.

Acknowledging the strong connection between a viable economy and sustenance of peace, Ambassador Skoog said it was important for the International Community to come together to support economic revival in Liberia, and ensure that the people of Liberia feel the benefits of peace.

Ambassador Skoog said the PBC was committed to accompanying Liberia through its peacebuilding process and underscored the need to consolidate the progress and ensure the reversibility of peace dividends, especially Liberia’s exemplary transition from peacekeeping to peacebuilding, which is being hailed internationally. He stressed the importance of inclusiveness in upholding democratic principles, national dialogue, unity, and respect for the rule of law.

On the recent June 7 protest, Ambassador Skoog and other members of the Commission who spoke during the meeting commended the Government and all stakeholders for ensuring a peaceful process. They also welcomed His Excellency President Weah’s call for a round table discussion on the way forward for the Liberian economy.

United States Ambassador to Liberia, Her Excellency Ms. Christine Elder, the Special Representative and Head of the African Union Liaison Office (AULO) in Liberia, Mr. Ibrahim Mbaba Kamara, and the Special Representative and Head of the United Nations Office for West Africa, Dr. Mohammed Ibn Chambas, all praised the essential role played by His Excellency President Weah and his Government and pledged to continue to cooperate with the Government in its development drive.

Representatives of Norway, Canada, and the European Union at the United Nations, also hailed the essential role played by His Excellency President Weah and his Government in ensuring the peaceful conduct of the June 7 protest.

The Peacebuilding Commission Meeting on Liberia was proposed by His Excellency Ambassador Dee-Maxwell Saah Kemayah, Sr., Permanent Representative of Liberia to the United Nations to take stock of economic, political and social developments in Liberia within the framework of the Pro-Poor Agenda for Prosperity and Development, and consider the Liberian Government’s response to the June 7 protest.