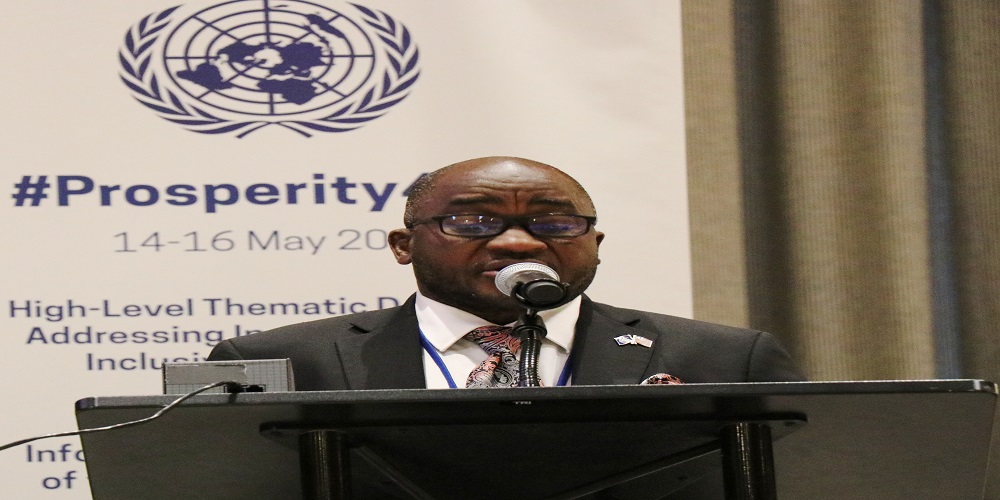 The Permanent Representative of the Republic of Liberia to the United Nations, His Excellency Ambassador Dee-Maxwell Saah Kemayah, Sr., says the pursuit of economic transformation remains an overarching objective of the Administration of His Excellency Dr. George Manneh Weah, President of the Republic of Liberia; with diversification as a key factor.

Ambassador Kemayah said the Government, through its National Development Framework “The Pro-Poor Agenda for Prosperity and Development” (PAPD), seeks to, among others, increase the competitiveness of existing industries; enhance diversification of the economic sector; and add value to primary products; while also enhancing economic productivity through investment in infrastructure and human capital development.

Liberia's Ambassador to the United Nations, however, lamented that like other developing countries, falling prices of primary commodities, price shocks, and related uncertainties have implications for Liberia's full capacity to stimulate economic growth; and promote revenue generation.

Said Ambassador Kemayah: " Commodity price downturn and related uncertainties do adversely affect the capacities of commodity-dependent developing countries to generate adequate and appropriate fiscal revenues from commodity exports; and mobilize domestic resources to support their national development plans; and by extension; with consequences for the implementation of the 2030 Agenda, and achieving the sustainable development goals (SDGs). We note that prices in agriculture products and minerals have been declining since 2011; as indicated in the Report of the United Nations Secretary-General on World Commodity Trends and Prospects (2015).  In 2011 for example, the prices of our primary export commodities-- iron ore and rubber, severely dropped on the global market."

Cognizant of the need to break the circle of dependence, transitioning from reliance on traditional primary commodities to alternative sustainable modes through economic diversification; value addition and enhanced participation in commodity and related product value chains; Ambassador Kemayah asserted that the Government of Liberia is poised to take actions in this direction and avails itself to partnerships that would support the implementation of the Pro-Poor Agenda for Prosperity and Development.

Ambassador Kemayah then called for collective task to support the efforts of commodity-dependent developing countries like Liberia to enhance their capacities to reap maximum gains from export of primary commodities; to include technical assistance, addressing commodity price instability, and policy actions to ensure a more equitable global trading system.

Liberia's Permanent Representative to the United Nations also encouraged the United Nations Conference on Trade and Development (UNCTAD) to take the lead in addressing factors that create structural barriers to international trade and diversification; including, but not limited to, tariff and non-tariff barriers.

The Liberian Ambassador to the United Nations expressed the hope that the United Nations General Assembly Interactive Dialogue on Commodity Markets will generate concrete recommendations that will contribute meaningfully to addressing the challenges being faced by commodity-dependent developing countries; as well as; on improving macroeconomic prospects.

The United Nations General Assembly Interactive Dialogue on Commodity Markets was held to facilitate a review of world commodity trends and prospects; particularly in commodity-dependent countries.