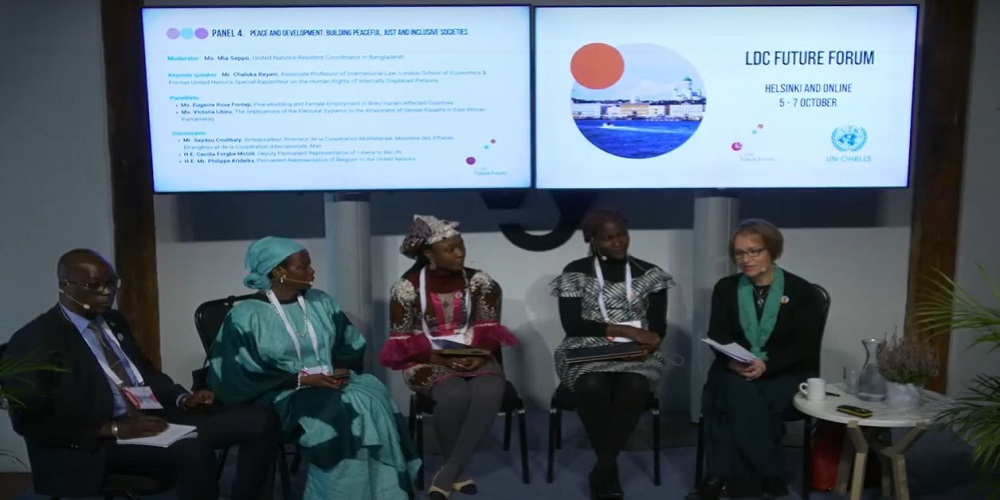 The LDC Future Forum is addressing the structural challenges and emerging issues faced by Least Developed Countries through debates and introduction of policy recommendations that can support LDCs in achieving the Sustainable Development Goals (SDGs), build their ability to compete in the global economy, and eventually move towards convergence with other more developed economies.

According to a dispatch from the Permanent Mission of Liberia to the United Nations, the Forum is tackling questions and themes around issues such as poverty eradication, quality education, and health care, emerging technologies, and climate, through panel discussions and interactive dialogues.

Ms. McGill emphasized that building peaceful, just, and inclusive societies would require concrete efforts to prevent and reduce all forms of violence, particularly against the most vulnerable, especially women and children; ensure access to justice for all, and build strong and accountable institutions to enhance social, economic, and political inclusion.

Sharing Liberia’s efforts to sustain the peace and development, Madam McGill highlighted that the Government of Liberia, under the astute leadership of His Excellency President George Manneh Weah, has created an enabling environment that enhances accountability and the rule of law, freedom of speech, and open participation in the democratic process, including women political participation.

Ms. McGill further elaborated that the Government, through its Pro-Poor Agenda for Prosperity and Development, supports inclusiveness through the implementation of policies that promote youth empowerment, girls’ education, civil society participation, and reconciliation; as well as practical programs that directly impact the lives of the Liberian populace—building of farm-to-market roads, markets, and hospitals.

Towards the Fifth United Nations Conference on the Least Developed Countries (LDC5), Ms. McGill called for the new Program of Action to capture measures to aid LDCs’ efforts in accelerating action to implement the SDG targets for peace, justice, and inclusion. “We strongly believe that such measures would support LDCs affected by conflict to address root causes of conflict, country-specific needs; enhance good governance, the rule of law, inclusiveness and transparency, and address all forms of inequalities.”

Ms. McGill, on behalf of His Excellency Dr. George Manneh Weah, President of the Republic of Liberia and His Excellency Dee-Maxwell Saah Kemayah, Sr., Minister of Foreign Affairs, expressed thanks to the organizers of the LDC Future Forum for the event and inviting Liberia to participate in a meaningful manner.

Speaking earlier at the opening session, policymakers and practitioners lamented that the Corona Virus pandemic, climate change, and a growing crisis of debt were causing the Least Developed Countries to fall further behind the rest of the world. They stressed the need for bold new ideas and a broad coalition to push them through.

United Nations Under-Secretary-General and High Representative for Least Developed Countries, Landlocked Developing Countries and Small Island Developing States, and organizer of the LDC Future Forum, Mr. Courtenay Rattray, stressed that the world “cannot solve new problems with old thinking – which is why the LDC Future Forum is such an exciting platform for big thinkers to come together to hash out big solutions to some very big problems.”

Prof Jeffrey Sachs of the United Nations Sustainable Development Solutions Network and co-organizer of the LDC Future Forum stressed that “the persistence of extreme poverty in a world of great wealth is unsustainable and unjust – and must be ended through a moral renewal and innovative thinking.