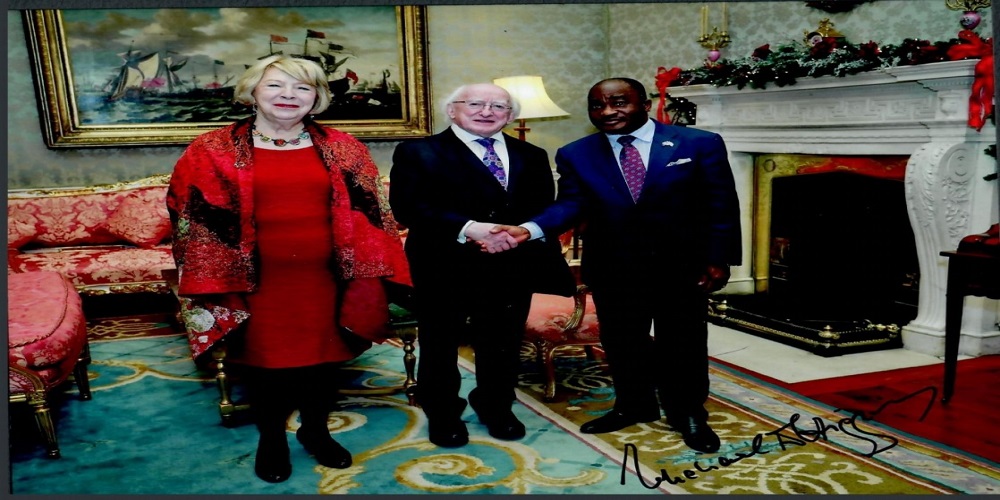 Liberia's Ambassador Extraordinary and Plenipotentiary and Permanent Representative to the United Nations, His Excellency Dee-Maxwell Saah Kemayah, Sr. says there is a need to ensure that women are at the core of global peacebuilding and peace sustenance initiatives if the world desires guaranteed and long-lasting peacekeeping and peacebuilding processes.

Addressing a Panel on 'The Role of Women in Making and Sustaining Peace at the 'Peacekeeping and Peacebuilding: Progress and Prospects Conference' in Ireland, Ambassador Kemayah said empirical findings have shown that participation of women in peacekeeping and peacebuilding processes positively contribute to the overall goal of peacekeeping initiatives, a dividend that has been acknowledged by the United Nations.

The panel discussed the important role that women have to play in brokering and sustaining peace and focused on international experiences; especially from the perspectives of Liberia, South Africa and Ireland.

Sharing Liberia's experience, Ambassador Kemayah said women of Liberia, the primary victims of the civil war, organized themselves and staged a silent non-violent protest demanding that all parties to the civil conflict sign on to a peace agreement.

Among others; Ambassador Kemayah shared that the women issued non-violent threats against Liberian men during the Accra peace negotiations held in Ghana, and succeeded in compelling the men-in arms to reach an agreement for a peace deal--setting the stage for the peace Liberia enjoys today.

In recognition of the role that the women played in restoring peace to Liberia, Ambassador Kemayah asserted that His Excellency, Dr. George Manneh Weah, President of the Republic of Liberia and Liberia's Feminist-in-Chief, has further solidified the role of women, avidly advocating for gender equality and placing women at the front burner of Government’s priorities.

Said Ambassador Kemayah: "Very pleased, and cognizant of the contribution women bring to the table in peacekeeping and peacebuilding, the Government of Liberia, has embarked upon various initiatives to expand the presence of female officers in the Liberian security sector.  Currently, the security apparatus in Liberia, including the Armed Forces of Liberia, the Liberia National Police and the Liberia Immigration service, is exerting efforts to increase the quota of female recruits and are identifying effective training and strategies to build the needed capacity of female officers to cope with challenges which hinder their advancement or entry into the security sector. To date, the strength of female officers in the Liberia National Police force is 18.5 percent."

Ambassador Kemayah noted that in furtherance of Liberia's adherence to the tenets of United Nations Security Council Resolution 1325 and his advocacy aimed at advancing women in political leadership; His President Weah has championed a bill for the amendment to Article 80 of the Liberian Constitution to provide additional seats for marginalized groupings to include women, persons living with disabilities and youths. This bill if passed; according to Ambassador Kemayah, will allow for fifteen seats for women in the Senate as per political sub-divisions and will be filled exclusively by female members of political parties.

Ambassador Kemayah named the "establishment of Gender Units in all security institutions, as well as in some Ministries and agencies; development of gender policies in three security institutions-- Liberia Immigration Service, Liberia National Police and the Bureau of Corrections and Rehabilitation; and the launch of the Spotlight initiative meant to end violence against women and girls" as major achievements in the implementation of the Gender Security Strategy.

Ambassador Kemayah assured that His Excellency President Weah and Government remain committed to supporting women's participation in global peace and security initiatives. "In the wake of challenges, His Excellency President Weah and the Government of Liberia remain extensively committed to the implementation of international commitments to the United Nations Security Council Resolution 1325 on Women, Peace and Security, and pleased to have also supported the unanimous adoption of Security Council Resolution s/res/2492 requiring States to unconditionally recommit to the Women, Peace and Security agenda; including by creating secure environments for women leaders, peace-builders, human rights activists and political actors around the globe."

Ambassador Kemayah concluded by expressing the strongest conviction that "for our one world to be a better, safe and happy place; women must be encouraged and supported to equally take up roles in our global community, not only in peacekeeping and peacebuilding but the United Nations must lead in this endeavor".

The Peacekeeping and Peacebuilding: Progress and Prospects Conference was organized by the Government of Ireland as part of the visit to Ireland of Forty (40) Ambassadors/Permanent Representatives to the United Nations.

Ambassador Kemayah also chatted with the Deputy Prime Minister and Minister of Foreign Affairs of Ireland, His Excellency Mr. Simon Coveney who launched Ireland's new strategy for Africa titled: 'Global Ireland: Ireland's Strategy for Africa to 2025', as part of activities marking the visit of Permanent Representatives to the United Nations to Ireland; and the Minister of State for Diaspora and International Development, Ciaran Cannon and explored opportunities for partnerships and investments in Liberia.

'Global Ireland: Ireland's Strategy for Africa to 2025' builds on Ireland’s longstanding engagement with Africa, and seeks to expand Ireland’s diplomatic presence on the continent and strengthen political partnerships with African countries and institutions. The strategy will also put in place frameworks to boost trade and investment and increase the number of fellowships available to postgraduate students from Africa.

Ambassador Kemayah is currently working with Her Excellency Ambassador Geraldine Byrne Nason, Permanent Representative of Ireland to the United Nations on follow-ups to bring the different proposals to fruition.

Ambassador Kemayah and other Ambassadors/Permanent Representatives from the United Nations also attended a reception with Her Excellency Mary Robinson, former President of Ireland and Chair of The Elders--an independent group of global leaders working together for peace, justice and human rights.

The visit to Ireland by Ambassador Kemayah was at the invitation and expense of the Government of Ireland.