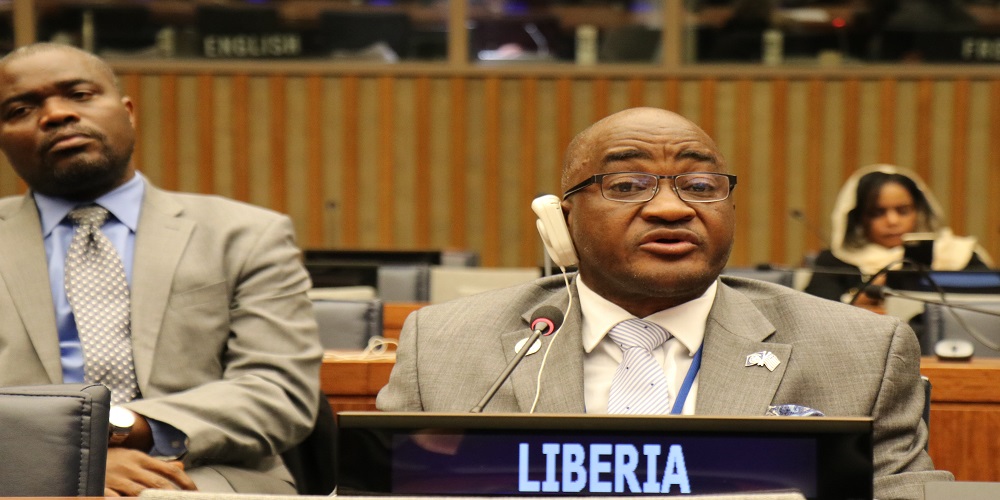 Liberia's Ambassador Extraordinary and Plenipotentiary and Permanent Representative to the United Nations, His Excellency Dee-Maxwell Saah Kemayah, Sr. has made a passionate plea to the international community to urgently support Liberia to ensure the sustenance of peace, democracy, and security.

Addressing the Annual Session of the United Nations Peacebuilding Commission in New York, Ambassador Kemayah lamented that the Liberian economy is under immense stress; as prices of major export commodities remain at rock-bottom.

Ambassador Kemayah further lamented that the internationally celebrated peace that Liberia enjoys is threatened by increased protests and the challenge to pay civil servants, and stressed the urgent need for support to Liberia.

Said Ambassador Kemayah: "Mr. Chair, Excellencies, Ladies and Gentlemen, if there was ever an urgent need to help Liberia, it is now! The peace we enjoy is being threatened by increased protests. The payment of salaries of civil servants remains a challenge. Hence, we want to use this medium, to once again call on the international community and Friends of Liberia, to kindly consider the consolidation of the much needed assistance to Liberia at this critical time. We want to call on the International Monetary Fund, the World Bank, and the African Development Bank, among others to do all in their purview, particularly considering how critical such assistance is to the continuous sustenance of peace, security, and democracy in Liberia."

The Liberian Envoy informed the United Nations Peacebuilding Commission that while seeking international assistance, the Government of Liberia, under the leadership of His Excellency Dr. George Manneh Weah, President of the Republic of Liberia, was also taking practical measures in a genuine attempt to address the inherited political and economic situation that the Country is experiencing.

Ambassador Kemayah named the holding of a National Economic Dialogue aimed at encouraging all Liberians to advance ideas in devising and supporting new measures which could successfully address the inherited structural defects and imbalances in the economy; and the reduction of salaries of officials and harmonization of salaries of civil servants as major initiatives.

The salary reduction and harmonization, according to Ambassador Kemayah, is in response to a call by the International Monetary Fund (IMF) for the Government to reduce its annual wage bill to US$297 million and reaffirmed the commitment of His Excellency President George Manneh Weah and the Government of Liberia to the enrollment of Liberia to the IMF program. Ambassador Kemayah was, however, quick to point out that His Excellency President Weah, upon his ascendancy to the Presidency, far ahead of the IMF request, announced a Twenty-five percent cut in his salary, an exemplary leadership that is being emulated.

Ambassador Kemayah disclosed that in the coming months, the administration of President Weah, intends to place particular emphasis on the agriculture, education and health sectors, and is looking to forge close collaboration with all relevant agencies of the United Nations in accelerating growth and development in Liberia.

The Liberian Envoy to the United Nations then used the occasion to recall with gratitude the Joint United Nations visit to the Mano River Union region; noting that cooperation in the region has intensified; but more is required to strengthen engagements on the sustenance of peace, security and democracy, while endeavoring to address or curb illegal cross-border activities, growing piracy, trafficking in persons and drugs, and climate change, among others.

Ambassador Kemayah described the visit to Liberia, as expressed solidarity and a renewed assurance by the international community and partners that Liberia remains a priority; an action that is very much appreciated by His Excellency President Weah and the Government and People of Liberia.

The Liberian diplomat to the United Nations said Liberia is grateful to all its partners, including the Peacebuilding Commission (PBC) that continues to create the platform for Liberia to be heard; and for the country’s priorities to be shared. Ambassador Kemayah noted that an iconic intervention by the Peacebuilding Commission in Liberia’s peacebuilding priorities was its instrumentality in the establishment and subsequent submission of Liberia’s Peacebuilding Plan, the auspices under which Liberia is opportune to receive the needed assistance from the United Nations and Partners.

Ambassador Kemayah then encouraged all partners to support the Multi-Partner Trust Fund (MPTF) as well as to the Government of Liberia Pro-poor Agenda for Prosperity and Development; as well as the secretariat of the Mano River Union, which he described as pivotal to ensuring the promotion and sustenance of peace, security, democracy and economic growth and development within the region.

Speaking in support of Liberia, His Excellency Olof Skoog of Sweden, Chair of the Liberia Configuration of the Peace Building Commission stressed the need for active support to Liberia's peacebuilding efforts to build on the gains that have been made.

Echoing Ambassador Kemayah on current difficulties in Liberia, Ambassador Skoog cautioned that the situation in Liberia was still fragile as a result of micro and macro economic difficulties, social tension, and austerity measures, and urged more countries, the World Bank, the African Development Bank, and the International Monetary Fund to find a way to support Liberia's peacebuilding efforts through the Peacebuilding Commission.

Also speaking in support of Liberia, the Deputy Permanent Representative of Ireland to the United Nations, Brian Flynn assured that Ireland will continue to support Liberia's Peacebuilding efforts,; especially through the implementation of the Government's development framework, the Pro-Poor Agenda for Prosperity and Development (PAPD).

Providing a briefing of the Joint United Nations Mission visit to the Mano River Union region, the Chair of the Peacebuilding Commission His Excellency Ambassador Guillermo Fernadez de Soto Valderrama said the visit was fulfilling and showed that countries of the region are working assiduously to avoid a relapse into conflict.

Ambassador Valderrama thanked Ambassador Kemayah for his statement and expressed that it reaffirms the assessment of the Joint United Nations Team that visited Liberia. He also thanked the Government of Liberia for its commitment and determination to making important headways for the future of Liberia.

The Annual Session of the Peacebuilding Commission convened at the United Nations Headquarters in New York on December 4, 2019.