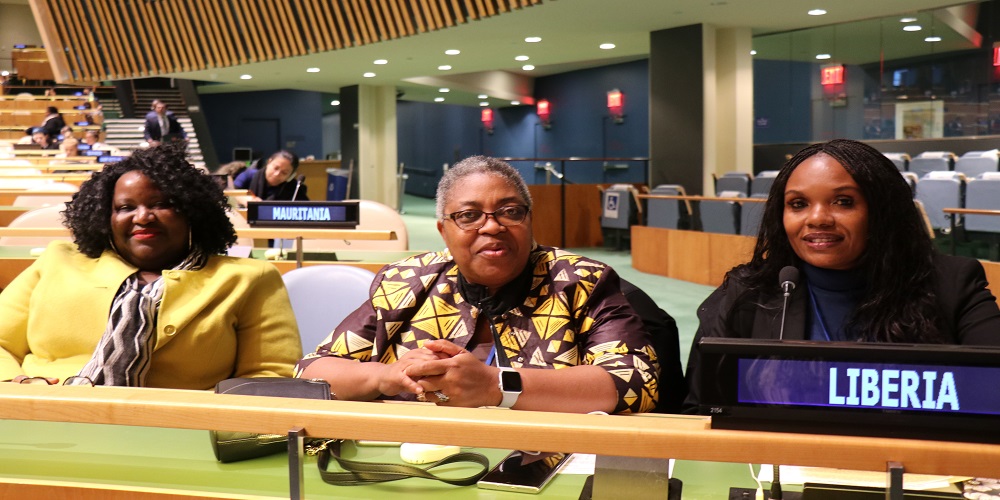 Liberia on Wednesday, November 20, 2019, joined Countries the world over to commemorate the Thirtieth (30th) anniversary of the Convention on the Rights of the Child (CRC) and World's Children's Day at the United Nations Headquarters in New York.

Addressing the Commemorative event at the United Nations, Liberia's Deputy Minister of Gender, Children and Social Protection, Hon. Lydia Mai Sherman said Liberia has made significant strides in implementing the Convention on the Rights of the Child; especially through the enactment of legislation and development of policies and programs that address the rights and welfare of children.

The legislation, policies, and programs according to Deputy Minister Sherman, highlight children's rights to survival, access to quality education, justice, health, and social protection, as well as other services that impact their growth and development.

Said Hon. Sherman: "In 2010, we signed the Convention on the Rights of Persons Living with Disabilities; with specific reference to Article 7 which addresses the needs of children; 2011 we established the Education Reform Act. The same year, 2011, Liberia, in collaboration with UNICEF, established the Ministry of Justice Child Justice Section (the Section); which coordinates child justice issues including policy formulation and implementation of Juvenile Diversion Program. In 2012, Liberia enacted the Children law designed to domesticate the Convention on the Rights of the Child in our national legal framework. In 2014, Liberia launched a five-year action plan in the fight against trafficking of persons, including children; and established the anti-human trafficking task force."

A dispatch from the Permanent Mission of the Republic of Liberia to the United Nations quotes Deputy Minister Sherman as saying that the Government of Liberia has also revised the Domestic Relation Law, with specific reference to inter-country adoptions, and is vigorously implementing the Decent Work Bill which prevents children from being subject to the worst forms of child labor.

At the same time, the Deputy Gender Minister told the United Nations that the Government through the Ministry of Gender, Children and Social Protection had set in motion, the Children’s Representative Forum--a platform for children to advocate and articulate issues that affect them.

On the celebration of the Thirtieth (30th) anniversary of the Convention on the Rights of the Child (CRC) and World's Children's Day nationally, Minister Sherman disclosed that Liberia is celebrating the day with an elaborate event under the National theme: ‘Make Every Child Future Count by Protecting Their Rights Today’.

Madam Sherman further disclosed that as part of the national celebration, a “Kids take over day” was held, where Twenty (20) children from the Liberia Children Forum took over positions of key Government Ministries and Agencies, and private entities. They acted as Ministers, Managing Directors and Principals, among others. The idea, according to Hon. Sherman was to give the children the opportunity for a day to participate in leading roles which will give them opportunities to build their self-esteem.

The Deputy Gender Children and Social Protection Minister used the occasion to express gratitude to all partners, including the United Nations Children's Fund (UNICEF), the European Union and the United Nations for their support in ensuring the welfare of Liberian children.

Hon. Sherman, however, said while some improvements have been made; benefitting millions of children globally; it was disheartening to know that many kids are still deprived of the life they deserve, and admonished children to continue to ensure that their voices resonate in matters that affect them – healthcare, climate change, education, food, shelter, and decent life among others.

Urging the world to do more to ensure the welfare of children, Deputy Minister Sherman concluded with a quote from a great African son, Nelson Mandela: "There can be no keener revelation of a society's soul than the way in which it treats its children. Let us reach out to the children. Let us do whatever we can to support their fight to rise above their pain and suffering".