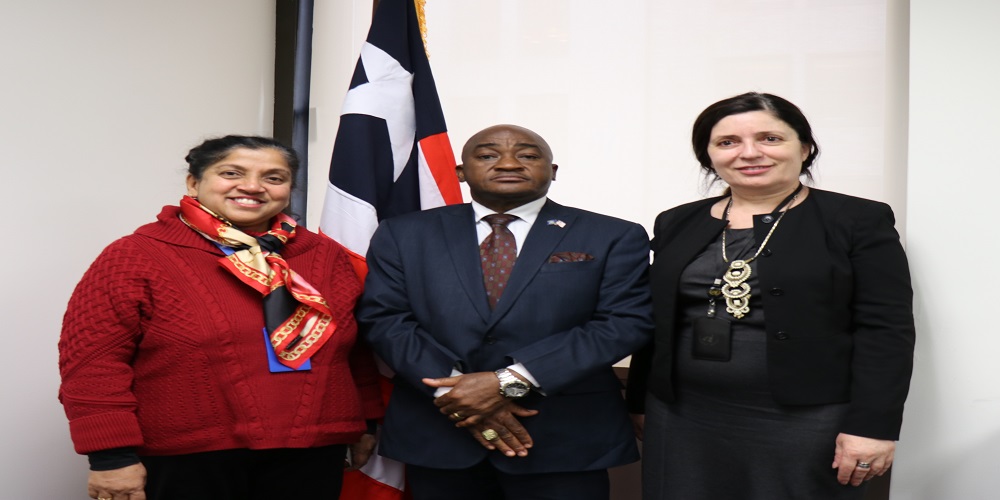 The United Nations Department of Management Strategy, Policy and Compliance will beginning November 24, 2019, visit Liberia on a five-day Outreach Mission to create awareness on the recruitment process of the United Nations.

Ms. Asokumar disclosed that Liberia is among Countries that are under-represented within the United Nations System; and observed that sometimes, qualified candidates who applied for United Nations jobs are not given due consideration because they are not cognizant of the application process; thus making simple mistakes that disqualify them.

Ms. Asokumar said there are positions that are geographically set aside for Liberians and expressed the hope that the Outreach Mission will attract more Liberians to apply to fill such positions. She named the United Nations Young Professionals Programme (YPP) as one of the ways through which Liberians can be recruited for jobs within the United Nations system.

During a meeting in New York on Thursday, November 14, 2019, with His Excellency Dee-Maxwell Saah Kemayah, Sr., Ambassador Extraordinary and Plenipotentiary and  Permanent Representative of the Republic of  Liberia to the United Nations,  Ms. Asokumar disclosed that Ms. Floresha Berisha, Human Resources Officer at the Staffing Diversity and Outreach Section of the United Nations, will conduct the Outreach Mission in Liberia, and requested the support of the Government of Liberia to ensure that the visit is successful and impactful.

As part of the Outreach Mission, Ms. Berisha is expected to present to a diverse range of professionals in Liberia, a detailed overview of the United Nations Secretariat, job and career opportunities, and provide tips on application processes that will increase the probability of an applicant getting selected.

In response, His Excellency Ambassador Dee-Maxwell Saah Kemayah, Sr. welcomed the Outreach Mission and disclosed that it is the direct result of recent engagements by His Excellency Dr. George Manneh Weah, President of the Republic of Liberia, during meetings with United Nations Secretary-General His Excellency Mr. Antonio Guterres.

Ambassador Kemayah stressed that Liberians are amongst the world's most competent people, but agree with Ms. Asokumar that lack of awareness of procedures and systems can rob qualified people of opportunities. "Liberians are amongst the best in terms of competencies and skills; but you can even be the most educated, when you are not fully aware and cognizant with the procedure and familiar with the system, you can be denied the much-needed opportunity. I am of the strongest conviction that, this has been the situation with Liberians overtime."

The Liberian Envoy then stressed that employment of more Liberians within the United Nations will  not only increase the number of Liberians in the system but present an opportunity for international exposure and experience in diverse fields, while serving as a boost to the economy of Liberia and the livelihood of citizens; especially the family members and loved ones of those employed.

The Liberian envoy then outlined that he and his team at the Permanent Mission of Liberia to the United Nations will coordinate with the Government and the United Nations System in Liberia to ensure that the Outreach Team meets with the relevant authorities and target audience; especially the youth, who make up more than Sixty-three (63) percent of Liberia's population.  Ambassador Kemayah furthered that it is his desire and that of His Excellency President Weah, Liberia's Feminist-in-Chief, to see women play an increased role during the visit.

As part of the coordination, meetings will be set up between the Outreach team and the United Nations Resident Coordinator, officials from the Ministries of State for Presidential Affairs, Foreign Affairs, Justice, Information, Labor, Education, Gender, Children and Social Protection, and Youth and Sports; the Civil Service Agency, the National Commission on Higher Education, the University of Liberia, Cuttington University, United Methodist University, AME University, AME Zion University and other Universities and Institutions of Higher Learning.

The Outreach Team will have interactive sessions at various venues focusing on the United Nations Secretariat, job and career opportunities, and provide tips on the application process that will increase the probability of an applicant getting selected.

His Excellency Ambassador Dee-Maxwell Saah Kemayah, Sr. who expressed the hope that the Outreach Mission to Liberia will be the beginning of a sustained partnership, will accompany the Outreach Mission team from the Staffing Diversity and Outreach Section of the United Nations Department of Management Strategy, Policy and Compliance. They will be in Liberia from November 24-28, 2019.

Ms. Asokumar thanked Ambassador Kemayah for his enthusiasm and support to the Outreach Mission and expressed confidence that the Mission will have a great impact--an increase in the number of successful applications for employment for Liberians in the United Nations system, as experienced by other countries who benefited from previous Outreach Missions.