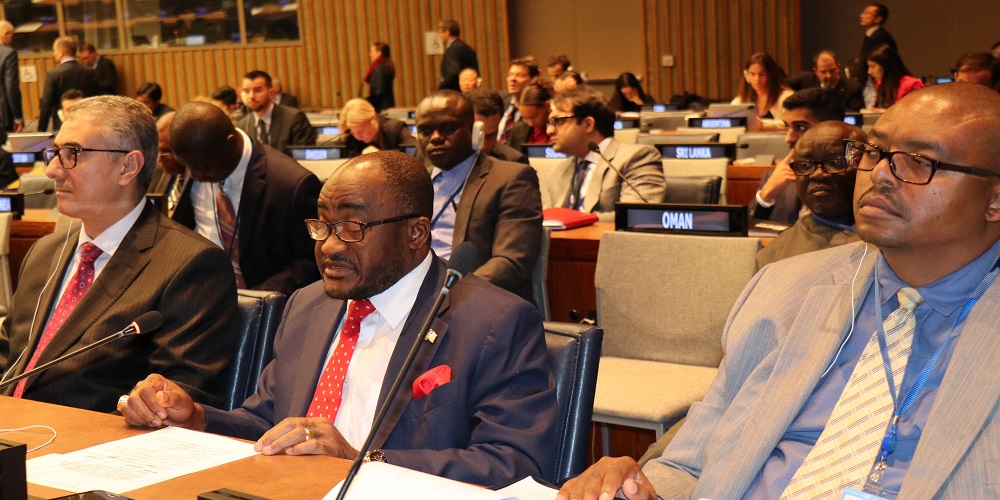 Liberia's Ambassador Extraordinary and Plenipotentiary and Permanent Representative to the United Nations, His Excellency Dee-Maxwell Saah Kemayah, Sr. says Liberia continues to make great strides in strengthening its legal framework; especially for the domestication of the Arms Trade Treaty.

According to Ambassador Kemayah, the bills which will be submitted to the National Legislature upon return from its annual Agriculture Break; next year-- 2020, seek to enhance national accountability and transparency of the flow of arms and increase the scope and mandate of the Liberia National Commission on Small Arms (LiNCSA).

A dispatch from the Permanent Mission of Liberia to the United Nations quotes Ambassador Kemayah as saying that the bills were reviewed and validated by the Liberia International Humanitarian Law Committee (LIHLC), stakeholders from the Security Agencies of the Government, and relevant Civil Society Organizations.

Addressing the General Debate of the United Nations Committee on Disarmament and International Security (First Committee) for the Seventy-fourth Session of the United Nations General Assembly (74th UNGA) recently, Ambassador Kemayah said the practical actions to domesticate the Arms Trade Treaty is evidence of Liberia's commitment to its global obligations to promoting peace and security; especially in curbing the illicit trade, possession, manufacturing and the circulation of small arms and light weapons.

Said Ambassador Kemayah: "Pursuant to the commitment to its global obligations, the Government of His Excellency President Weah re-affirms its unwavering support to the Arms Trade Treaty (ATT); and recognizes the critical role and the impact of multilateral instruments; including the United Nations Program of Action (PoA) to prevent, combat, and eradicate the illicit trade in Small Arms and Light Weapons in all of its aspects; as well as the International Tracing Instrument (ITI) used to identify and trace the massive flow of illegal arms and light weapons. Liberia will continue to be a contributing country to global efforts in promoting peace and security. We reaffirm our  commitment as a state party to the Non Proliferation Treaty (NPT) and remain supportive of the African Union (AU) initiatives aimed at ensuring a conflict-free Africa; and appreciates the United Nations Security Council for its  newly adopted resolution S/RES/2457/ (2019) 'Silencing the Guns in Africa by the Year 2020'. We want to further assure that the unflinching support of His Excellency President WEAH, the Government and People of Liberia remains unabated."

The Liberian Envoy stressed that the Government of Liberia, through its Flagship National Pro-Poor Agenda for Prosperity and Development (PAPD), also endeavors to increase regional and multilateral cooperation and coordination for the attainment of international sustained peace and security.

Ambassador Kemayah hailed initiatives of the United Nations aimed at mitigating conflicts around the world and promoting disarmament efforts in the area of conventional weapons; especially land mines and small arms, which are often the weapons of choice in contemporary conflicts; as was the case of Liberia.

Ambassador Kemayah urged the United Nations to do more to guarantee the safety and prosperity of the world. "In spite of the achievements of the United Nations regarding disarmament, we believe we can do better to guarantee the safety and prosperity of our world; though being cognizant of the growing threats, including tensions between states; civil wars, and terrorism – which now have no borders. As a global body, we will need to consolidate our work collaboratively to ensure; these heightened tensions and threats do not escalate." Ambassador Kemayah stressed.

Concluding, Ambassador Kemayah admonished the world body to be persistent in its efforts to ensure global peace and security. "Let me admonish all of us that the fight is never over until our dreams and aspirations are achieved. Our continuous persistence will certainly pay off. A safe and happy world can only spur happiness and productivity; where everyone can live, not in fear; but in sustained peace, security and development." Ambassador Kemayah emphasized.