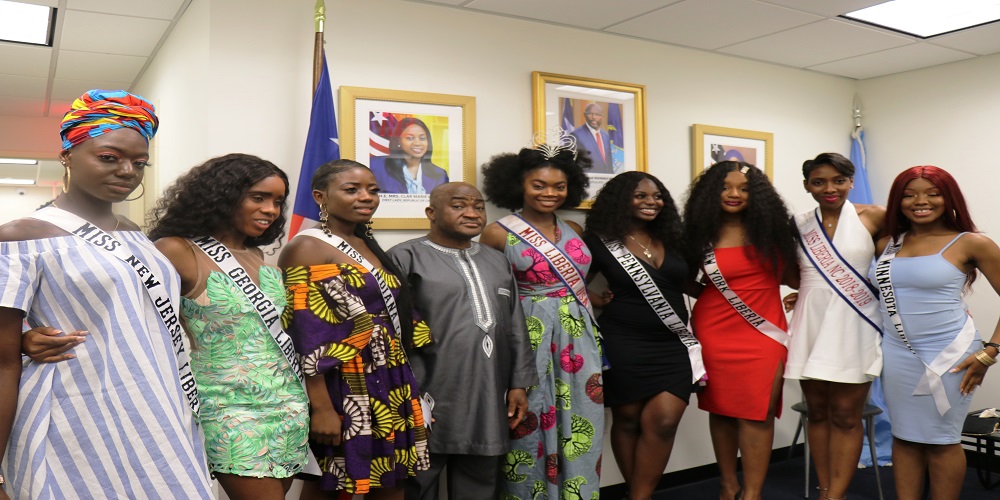 Contestants of the just ended 2019 'Miss Liberia United States of America (USA) Scholarship Pageant', are encouraging young Liberians to follow their dreams, exhibiting self-discipline and respect throughout their journey.

The contestants, representing the States of New York, New Jersey, Pennsylvania, Minnesota, Indianapolis, and Georgia; also stressed the importance of hard work and passion as drivers of success in the quest to achieve goals and dreams.

The contestants expressed the belief that while it is important and noble to serve in the Government, young people should realize that working in the Government is not the only source of making a living. They urged young Liberians to use their gifts and talents to become entrepreneurs and employers themselves.

The young Liberian ladies were speaking during a courtesy call on His Excellency Dee-Maxwell Saah Kemayah, Sr., Ambassador Extraordinary, and Plenipotentiary and Permanent Representative of the Republic of Liberia to the United Nations.

During the interactive visit, many of the contestants who indicated that they've gone public with their stories to positively impact other young people tearfully shared their life experiences--how they survived homelessness, sexual abuse and violence, neglect, and lack of confidence and self- esteem.

The contestants also shared their dreams and aspirations for Liberia. They envisaged among others, a country that will experience a change in the minds and attitudes of its people; a more unified people; more investments in infrastructure and the educational development of young people; and a liberated Liberia that is not exploited by outsiders.

On their contributions to ensuring a better Liberia in line with their dreams and aspirations, the contestants spoke of initiatives they have taken to support education and tourism; ranging from educational advocacy, distribution of books, uniforms, and desks; to awareness creation on the culture and richness of Liberia in various spaces. One of the contestants, Entrepreneur Vivian Smith, spoke of the ongoing construction of a building in Liberia that will be used to explore and enhance the talents of young Liberians.

For his part, His Excellency Ambassador Dee-Maxwell Saah Kemayah, Sr., welcomed the organizers and contestants of the 'Miss Liberia United States of America (USA) Scholarship Pageant' to the Permanent Mission of Liberia to the United Nations; and expressed that he was pleased and honored by their visit.

Ambassador Kemayah thanked the organizer of the pageant--the Liberia United Women in Progress for using the platform to promote young Liberian women in the United States; and bringing out their hidden talents. The Liberian Diplomat encouraged the organizer of the pageant to explore linking the event with the Ministry of Information, Cultural Affairs and Tourism, which has the mandate to conduct National Miss Liberia Pageants in Liberia.

Ambassador Kemayah also encouraged the Liberia United Women in Progress to include undertaking a tangible project in Liberia as part of its Pageant activities, to make it more visible in Liberia.

Ambassador Kemayah then assured the contestants that His Excellency Dr. George Manneh Weah, President of the Republic of Liberia, as Liberia's Feminist-in-Chief, has an unflinching practical commitment to women and youth empowerment.

On their dreams and aspirations for Liberia, the Liberian Envoy assured that the Government under the leadership of His Excellency President Weah is already making genuine efforts to address huge inherited challenges affecting the economy, the infrastructure, the educational and health sectors, among others.

The Liberian Ambassador to the United Nations encouraged the contestants and all Liberians in the Diaspora to join the development drive of His Excellency President Weah, and contribute to addressing the inherited challenges in Liberia. He also encouraged Liberians to speak positively about the Country to people they meet and on social media; stressing that such actions would encourage Foreigners and investors to develop interest in Liberia.

Miss Liberia New York; Nupol Kiazolu, won the 2019 'Miss Liberia United States of America (USA) Scholarship Pageant'. The Nineteen (19) year old is a student of the Hampton University in Virginia. She is also a Civil Rights Activist and President of the Greater New York Chapter of Black Lives Matter; and the first Liberian to make the  'Teen Vogue's 21 Under 21 Class'--which spotlights extraordinary young women, girls, and femmes making waves in their industries or passions of choice. As part of her reign as Miss Liberia USA, Miss Kiazolu is expected to make a ten-day trip to Liberia.

The 2019 'Miss Liberia United States of America (USA) Scholarship Pageant' is the Seventeenth (17th) for the Liberia United Women in Progress, the official organizer of the event. The Head of the Organization, Pageant Director Ms. Renee Wilson explained that the event presents the contestants and winners with exposure and a platform to share and achieve their life's goals.

According to Ms. Wilson, the Pageant also provides the contestants and winners with amazing opportunities to travel and network at all levels--High-level, Middle-level and low-level; creating relevant partnerships to enhance their work.

Miss Wilson expressed appreciation to Ambassador Kemayah for the exceptional hospitality accorded her team; and the motivational session, which allowed the young women to speak up and share their stories for the young people in Liberia.  She described the exceptional reception received as the first of its kind for the Miss Liberia United States of America (USA) Scholarship Pageant team, in its seventeen (17) years of organizing the pageant. " It was indeed a memorable experience for the contestants, and the generosity you showed us was absolutely amazing. I hope to work with you again" Ms. Wilson stressed.