Brief Profile of His Excellency Ambassador Dee-Maxwell Saah Kemayah, Sr., Ambassador Extraordinary & Plenipotentiary & Permanent Representative of the Republic of Liberia to the United Nations and all its Organs 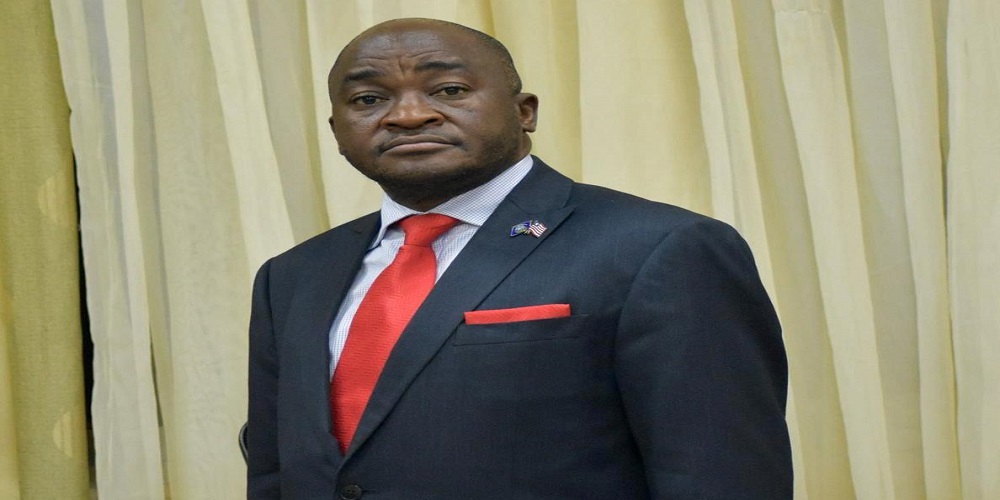 His Excellency Ambassador Dee-Maxwell Saah Kemayah, Sr. was appointed and commissioned as Liberia's Ambassador Extraordinary and Plenipotentiary and Permanent Representative of the Republic of Liberia to the United Nations and All Its Organs on September 4 and 12, 2018; respectively; and formally assumed attendant responsibilities at the Office of the Permanent Mission in New York, United States of America (USA) on September 18, 2019.

He presented his Letters of Credence to the Secretary-General of the United Nations, His Excellency Mr. Antonio Guterres on September 20, 2018.

Ambassador Kemayah has many years of High-Level work experience; spanning multiple institutions in the Non-Governmental Organization/Civil Society, Private and Public Sectors; with a focus on Public Policy Administration, Diplomacy, Governance, Development, and Humanity. His Leadership has led to improved competencies in policy formulation and strategic planning and implementation across diverse institutions; including the Public, Private, Non-Governmental/Civil Society arena; and the Church.

Ambassador Kemayah also currently serves as the Political Leader of the Movement for Economic Empowerment (MOVEE), a recognized Political Party that contested the 2017 Representative and Presidential Elections in Liberia. He was one (1) of Thirty (30) Members of the Joint Transition Team of the Republic of Liberia that worked diligently to ensure the successful historic transition from one (1) living democratic elected President to another in over Seventy-three (+73) years.

From 2015 to 2017, Ambassador Kemayah served as Chairman of the Liberia Coordinating Mechanism (LCM)--the Coordinating Body that governs all Global Fund programs and activities in Liberia; especially; in relation to HIV/AIDS, Tuberculosis and Malaria. As Chairman of the LCM, Ambassador Kemayah served as Global Fund Representative to the Health Sector Pool Fund Steering Committee (HSPFSC). The HSPFSC comprises of international donors and representatives of the Government of Liberia; and has oversight mandate for the Health Sector Pool Fund. The Fund was established to support the implementation of the 2011-2021 National Health and Social Welfare Policy and Plan, and the Investment Plan for Building a Resilient Health System 2015-2021.

As an integral part of his professional life, Ambassador Kemayah also served on several Boards in Liberia, including the National Commission on Higher Education, National AIDS Commission of Liberia and the Liberia Institute of Statistics and Geo-Information Services (LISGIS). Ambassador Kemayah also served as President of the Liberian Business Association (LIBA) from November 18, 2011, to January 6, 2017; where he successfully decentralized and transformed LIBA-The Apex Body; and The Voice and Face of Liberian owned businesses; unprecedentedly bringing it to national and international prominence.

Ambassador Kemayah is a devout Christian who has provided meaningful services and support to the Baptist Church in Liberia, and the religious community in general. He served fervently as Chairman of the Board of Trustees of the First Baptist Church and the Mount Nebo Baptist Church from 2008 to 2010; and 2013 to 2017; respectively. Ambassador Kemayah also served as a Member of the Board of Trustees of the Liberia Baptist Theological Seminary (LBTS), a Premier Theological Seminary owned; and run by the Liberia Baptist Missionary and Educational Convention (LBM&EC), from 2010 to 2014.

Ambassador Kemayah is also a lover and staunch supporter/promoter of Sports, specifically Football (Soccer). For six (6) years; he sponsored/supported; and administered the affairs of Ma-Watta-Watanga Football Club, (now Watanga Football Club), a First (1st) Division Club of the Liberia Football Association (LFA), where he served as President of the Club. At the level of the LFA, Ambassador Kemayah served in a number of top positions; including, but not limited to Executive Committee Member; a post he held for six (6) years.

Ambassador Kemayah is married to an astute Liberian; and a God-fearing woman ofTrue Virtues, Substance, Integrity, Professionalism, and Productivity- Reverend Mrs. Dialokai Golanyon-Kemayah, a Registered and Ophthalmic Nurse; and their union is very much blessed with nine (9) dependents.