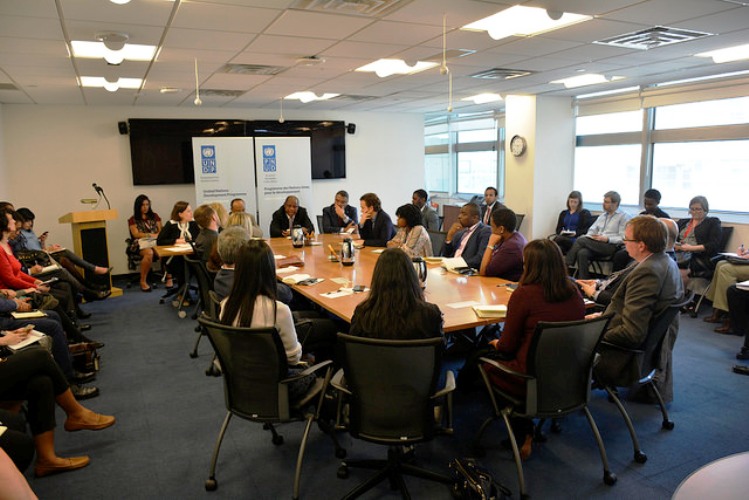 As part of consultations for the formulation of the Pro-Poor Agenda for Prosperity and Development, Finance and Development Planning Minister Samuel D. Tweah Jr. has held a series of meetings with top United Nations officials and donors in New York.

At a donor roundtable last week, Minister Tweah shared with partners including the United Nations Development Program (UNDP), European Union, Crisis Fragility and Resilience Unit, and representatives from the Swedish and German Missions; the roadmap for the Pro-Poor Agenda, which he described as an ambitious plan intended to respond to the needs of Liberians especially the deprived and those living in poverty. Minister Tweah named road connectivity, youth, and human development, investing in agriculture especially rice and cassava as major priorities.

A dispatch from Liberia’s Permanent Mission to the United Nations quotes Minister Tweah as saying, while the Government encourages donations and support from its partners; it realizes that Liberia “cannot continue to look at aid as a means for sustainable development”. He disclosed that the Government would endeavor to embark on a domestic resource mobilization strategy that would raise more revenue while curtailing inefficient expenditure and waste.

The Minister spoke of the recent austerity measures endorsed by the Cabinet-- a ten percent salary reduction across the board for cabinet ministers and the agreement that heads of public corporations and autonomous agencies will make not more than $7,800USD in monthly salary. The action, according to the Minister will save the government nearly 5 million dollars which will be used for pro-poor investments.

Accompanying the Minister, the Resident Coordinator of the United Nations in Liberia, Assistant Secretary-General Yacoub El Hillo hailed the government's actions and described them as a step in the right direction. "The issues in Liberia are the same. What is needed is a new and innovative strategy to address them" he said.

Urging the international community to keep Liberia on the radar for support, the UN Chief in Liberia urged international partners not to get “mesmerized” for too long about the success story" warning that Liberia was still in a "fragile" state.

In response, the donors welcomed the Government’s plan and pledged their support to help Liberia revive its economy and sustain the peace. They, however, urged the Government to ensure national ownership of the new development plan and align it with the budget for successful implementation.

One of the partners, the European Union through its delegation to the United Nations, disclosed a 27 million Euros budget support for Liberia with 4 million to be released in this fiscal year. The EU also assured that it will continue to support the Country's Energy sector.

Other partners including Sweden said they were considering supporting Liberia through the Multi-Partner Trust Fund, administered by the United Nations.

Other officials consulted during the series of meetings last week include the Executive Coordinator of the UN Multi-Partner Trust Fund Jennifer Toppings, the Acting Head of the UN Department of Political Affairs Taye-Brook Zerihoun, and UNDP’s Assistant Administrator Abdoulaye Mar Dieye.